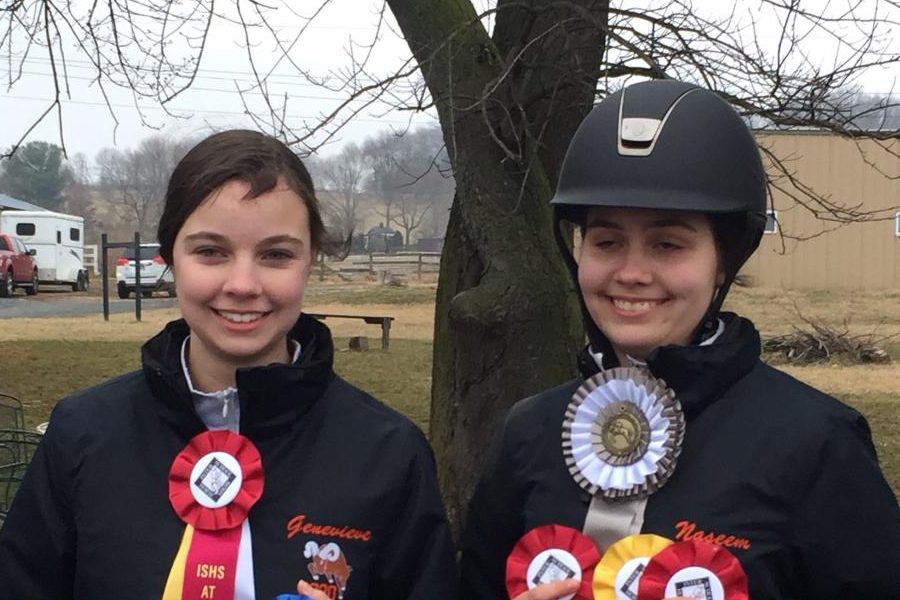 Most people imagine winning a sports game by scoring goals or points. For junior equestrian Genevieve Hill, she wins competitions by riding through complex obstacles on a horse, jumping over fences at different heights.

Hill has tried gymnastics, archery, dance, track and baseball, but didn’t feel that she had found her niche until she started horseback riding at the age of 11 and fell in love with it. No other sport can make her feel the way she does when she rides horses, she said.

“It is an escape for me and has become my passion. It fits perfectly for me,” Hill said.

Equestrianism consists of riders jumping over poles of different heights called fences. The different types of fences include cross rails, verticals and oxers, based on their height.

Even though the equestrian team is among one of the smaller clubs at RHS, Hill has been involved with the team since her freshman year. Former coach and member of the team who graduated last year, Naseem Najafi said Hill was a great addition to the team in 2016.

“She is very positive and helps others get ready. She supports the team overall. She is a very high performer as well,” Najafi said.

Hill started out on the JV team for RHS freshman year, in which she was competing in easier courses with smaller jumps. After a lot of practice and determination, she has moved her way up to one of the highest divisions on the varsity team. She has improved positioning herself on the horse, making her jumps and becoming a better rider altogether, she said.

Equestrians train for hours and have to build a strong connection with their horse, Hill’s training partner, who requested anonymity, said.

“It’s a team of the rider and the horse. You have to learn to form a relationship with the horse and you have to get over a lot of fears to ride,” her training partner said.

Falling off the horse is very common in competition; therefore, equestrians have to learn how to position themselves in order to stay on the horse. Hill has fallen off of her horse a number of times, but continues to get up every time.

“I’ve been thrown off the horse once, and fallen off three times. I had really bad bruising from the fall, but all I could do was stand up and get back on,” Hill said. “I don’t wait to get back on. I could have a broken arm and I wouldn’t notice because I would be right back on the horse jumping.”

Hill said she is going to continue riding through her senior year and hopes to bring equestrianism into her future. As she continues to grow in the sport, she also supports her peers.

“She’s a mentor for me since she never gives up, and it shows,” her partner said. “She’s dedicated and usually places very well [in competition].”