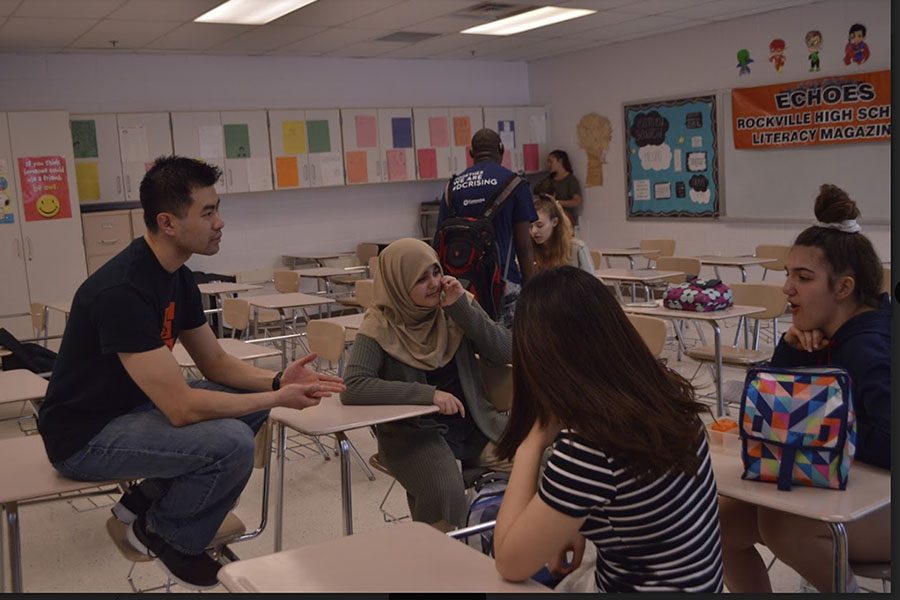 Often times students’ artistic talents go unnoticed and are under appreciated, but the Echoes literary arts magazine gives them a platform to showcase their work and in recent years the magazine has received national recognition for students’ work.

RHS’ Echoes’ self-described mission is to feature the varying artistic talents of the student body in their annual Echoes literary arts magazine which has led to recognition by the National Scholastic Press Association (NSPA) twice–once for their 1998 issue that qualified them as finalists and now 20 years later for their 2018 Pacemaker award winning issue.

Echoes is made up of around 40 students who meet every Tuesday in English teacher and club sponsor Sean Pang’s room to analyze the poetry, fiction and nonfiction writing, and art pieces that are submitted to them. Any RHS student is welcome to submit their work to the Echoes email throughout the school year until the March deadline.

Echoes was recently recognized on their Vol. 36 issue for the 2017-18 school year by the NSPA, a reputable organization that focuses on providing media critique and recognition. Echoes became an NSPA Magazine Pacemaker award winner.

Every year NSPA selects 28 magazines as finalists. Last year they analyzed 115 entries from 31 different states, according to their website. Only eight schools win.

The success of Echoes can be attributed to the leadership and dedication of students involved, Echos adviser Pang said. Senior editor Esther Frances became part of Echoes last school year and served as junior managing editor working to develop the issue that classified Echos as a NSPA Pacemaker winners. Since then, Frances has become a leader on which the staff can depend on according to junior managing editor Tiffany Reyes. Echoes gave her the ability to storytell, create, analyze, showcase and lead, Frances said.

In 2011, Pang became the Echos adviser, dedicating his time and offering his feedback on fundraising events, magazine format and guiding staff whenever needed.

“I worked on my college’s literary art magazine, and when I came [to RHS] there wasn’t really one in existence, so that is why I came and took the position because I think it is important to yield student work,” Pang said.

Pang’s dedication to the club as well as his ability to take a step back and allow students to take leadership and responsibility aided the position that the magazine holds today, Frances said.

As pieces are submitted to Echoes, they get distributed to the section that the piece belongs in. Each section will grade the piece they were assigned based on a rubric specially designed for that category. The highest rated pieces will become part of the Echoes annual magazine, non-fiction section editor Drew Balfour said.

While getting recognized for their hard work is substantial, the community aspect of the Echoes staff is a significant reason for their recent success.  Members spoke about how the experience provides an outlet for students to share their talents and be recognized for them by their peers, their teachers and anyone else who flips through the magazine.

“I learned so much from this [Echoes]. I see the reviews and I’m like ‘I didn’t know this person did art or this person wrote poetry or nonfiction or fiction and it is amazing,” Reyes said. “You don’t see that every day in class, but with Echoes you get to see everyone’s talents.”