‘@2kforbes Filmed It’: Capturing the Colors of the Game 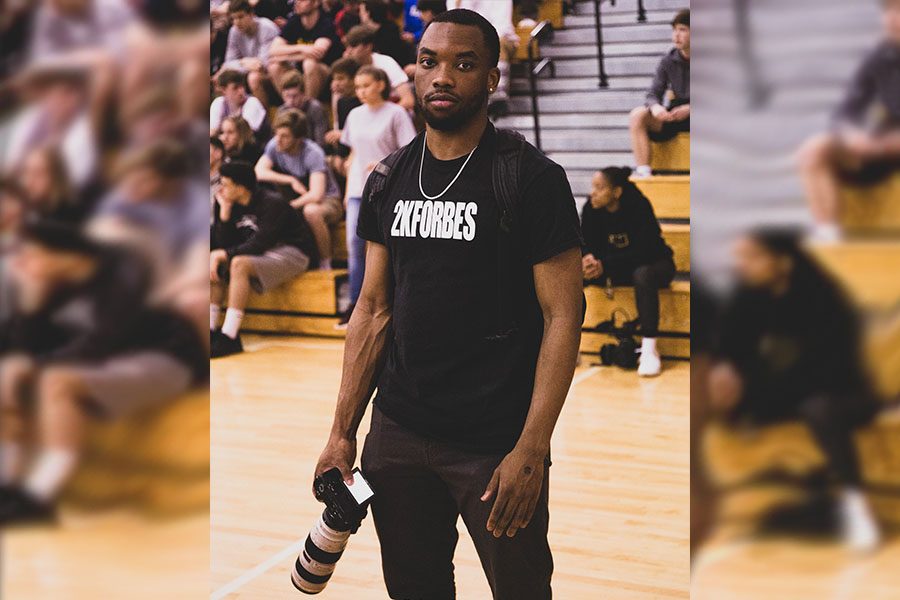 Remi Ali, more commonly known by his Instagram handle @2kforbes, has racked up over 11,000 followers.

“2k Forbes Filmed It!” is not only the tag in the beginning of every mixtape and video created by 2kFORBES, but has now become a well-known catchphrase in Montgomery County.

Remi Ali, a new name in the county, has had a tremendous impact on MCPS basketball and has continually grown in popularity since hitting his stride throughout the 2019 season. Most know him by his Instagram handle @2kforbes, where he has racked up over 11,000 followers.

Ali grew up in Silver Spring, Md. and has been playing basketball his entire life, he said. He attended Montgomery Blair High School (HS) from 2009-2013 and played for their basketball team all four years, continuing his basketball career at Frostburg State University before transferring to the University of Maryland College Park (UMD) to focus on his education.

Ali purchased his first camera in April 2018 and immediately decided to make use of it as he began attending basketball games to capture the true colors of the game, he said. When the 2018-19 basketball season came around in December, Ali made frequent appearances at local games with his camera in order to capture some footage of the people in his hometown area.

“I just started collecting some footage from people around my area, whether it was at UMD or [in a] high school, it didn’t really matter to me but I started doing a couple of high school games when the season came around and it just kinda blew up,” Ali said.

Ali gained popularity through filming big rivalry games including the regional championship game between Richard Montgomery HS (RMHS) and the Walter Johnson Wildcats. He was also in attendance at the Xfinity Center to film the state playoffs.

“[Ali] really gave us more exposure throughout the county and allowed for us to show people that we were the real deal,” Stubin said.

Instagram is Ali’s main source of media and the platform he uses most often to share his video mixtapes of teams and individuals. Using this platform has played a crucial role in his success thus far.

“Without social media, I wouldn’t be where I am,” Ali said.

Although this could be considered as his breakout year on social media, racking up as many followers as he did this past season, Ali has no intentions of slowing down.

“I want to take this as far as I can go. I had a plan, and now my dreams are bigger than ever, currently my biggest goal is to be the top multimedia platform in the DMV,” Ali said.

Ali isn’t just a cameraman. Players he has recorded say that Ali has given them the extra edge to bring their game to the next level knowing that so many more people are now seeing their games through his videos.

“2k has personally helped me achieve confidence and focus in playing the game but at the same time having the cameras on me has helped me focus while being watched,” Gaithersburg HS (GHS) sophomore guard Jao Ituka said.

Ituka hit the impressive feat of his 1,000th career point at the end of his sophomore season, leading his team this season averaging 24.4 points per game and brought GHS all the way to the sectional finals where they were defeated by RMHS.

With a Sony camera strapped around his neck, and a sweater or a T-shirt with “2kForbes” written in large white letters, Ali’s attendance stands out even at big basketball games. Ali uses the software Adobe Premiere as well as Adobe After Effects to make his edits on these games. This gives him some of his signature effects when putting together a hoop mixtape.

Ali doesn’t profit from his videos and just wants to capture footage of how the game of basketball and its hype have changed over the years, he said. He has big plans for his brand and hopes to expand as much as possible.

“I do want to branch off to more sports than just basketball,” Ali said. “Once I can secure the DMV, [I want to] expand to the United States from the East Coast to the west coast. I want to be huge.”

Despite wanting to expand his brand, Ali is currently more invested in going back to where it all started and focusing more time and attention to high school basketball.

“High school basketball is where it starts because that is where I am most proficient and most knowledgeable. I think that is where my biggest fan base is as of now because I have not gone to different sports,” Ali said.

Ali said he does not see himself slowing down in the future and plans to also get into the extended filmmaking field, with goals of making documentaries not just for high school but also for college level athletes. He said he believes becoming the primary source for where sports and social media come together within the county is where he hopes to be.