Juice WRLD Runs Out Of Juice On ‘Death Race For Love’ 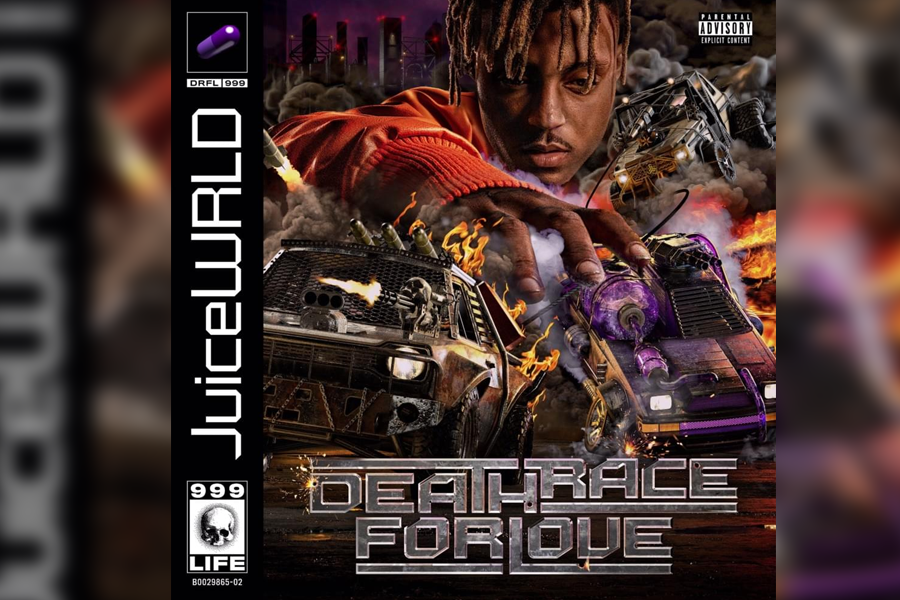 Emo rap is a fast-growing music genre new to many despite originating in 1997 with a rapper named Slug. In 2017, rappers such as Lil Peep, Lil Uzi Vert, and Trippie Redd reinvigorated the genre’s popularity and most recently, with the release of Juice WRLD’s newest album, emo rap is once again trending.

Jarad Higgins, better known as Juice WRLD, has been releasing music since 2015. He released his second solo studio album, “Death Race For Love,” March 8 with Grade A and Interscope Records. His songs “Robbery” and “Hear Me Calling” have reached the Billboard Top 100 List at 34 and 56, respectively, but the album as a whole can feel long.

Juice WRLD, a rapper making a big impact in the emo rap genre, has released a total of three studio albums. He has released two solo albums and a third album which was a partner album with popular rapper Future called “WRLD on Drugs.” His first studio album was called “Goodbye & Good Riddance” released in May 2018. “Lucid Dreams” was the most popular song on that album, reaching No. 6 on Billboard’s “Hot 100” while “All Girls Are The Same” amassed 48.3 million streams. These two songs along with the rest of his album earned him a $3 million contract with Interscope.

Unlike his previous album which was shorter, “Death Race for Love” has 22 tracks on it, lasting one hour and 22 minutes. Some listeners like to just binge listen, yet it may be unsuitable for those who may not be able to listen for the full almost hour and a half.

Listeners said they loved songs on his last album because they were short.

“I like the song ‘Shorty’ because it’s short and super serious,” sophomore Valeria Castillo said. “It doesn’t only talk about drugs.”

Some of the songs on this album do not stand out and can be skipped. The song “Syphilis” is him jumping up and down screaming about how many girls he gets. The song “The Bees Knees” is too long and halfway through, Juice WRLD changes the beat which just messes up the flow. It felt as if he was trying to do what Travis Scott and Drake did on their track “Sicko Mode,” but with less success.

Even with these faults, the production quality on the album is stunning. Every song has a completely different beat and the flows kept changing. Listeners will at least be engaged by how he slowly creates his own unique style evolving his sad-emo rap style into a true art form.

The best songs on the album are “Fast,” “Empty”  and “Big.” They are fast and a lot of fun to dance to. Each is shorter compared to the majority of the songs on the album. “Fast” lives up to its title as he speeds through his lyrics making them hard to understand. But, the song has an interesting melody. “Big” has loud vocals and big bass drops. “Empty”  is the first song on the album and while it is repetitive, it’s enjoyable. Juice WRLD talks about how he really wants to change his style, showing growth from his last album. One of the more positive aspects is when he talks about real things including his struggle with a drug problem as a teen.

“Death Race for Love” is a step forward for Juice WRLD, but at times it feels as if he did not put forth a lot of effort and it shows. The album isn’t bad, but it isn’t amazing either. Fans who love Juice WRLD won’t be disappointed, but they will have to endure a long 22-track album.