Start a Conversation, Not a Cancellation 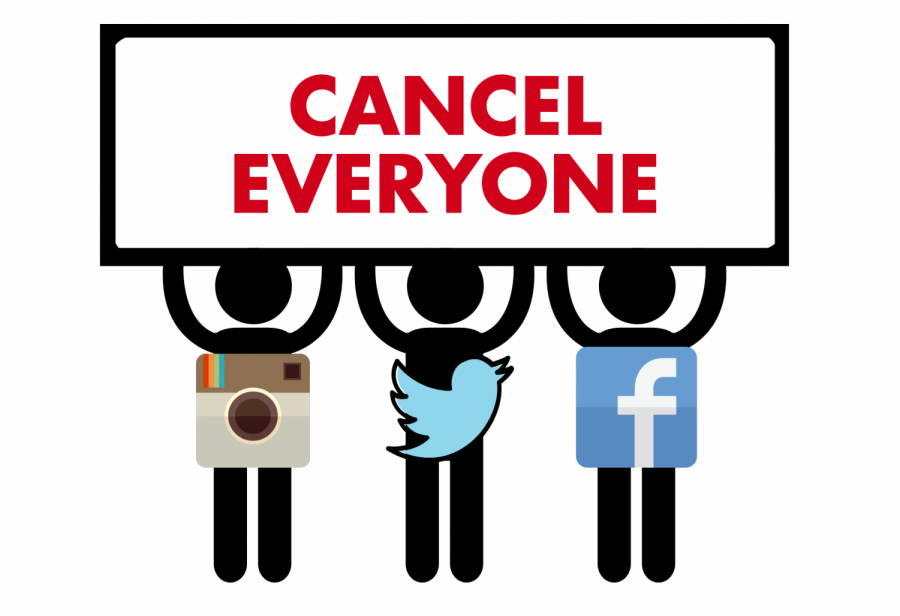 The detrimental psychological and moral effects of societies cancelled culture are heightened by social media.

Although this specific scenario is hypothetical, in 2019, many people can build a life and career only to have it completely ruined in a matter of seconds. With the growing popularity of social media, personal lives are made public which gives society the opportunity to judge and possibly ruin the career of a stranger, creating the cancelled culture–think Kevin Hart, Matt Damon, Taylor Swift and the list goes on.

People need to re-evaluate the cancelled culture because the process subconsciously instills a message that no one is worthy of forgiveness or should be given the opportunity to change, which is detrimental to the collective morals of society as a whole. The mindset of “cancelling” a person is especially problematic for those in the public eye, such as politicians and celebrities who are seemingly always at risk of losing support over an old mistake.

Often times, the content needed to “cancel” someone can be found in the depths of the internet. But, it can also be current news and now with the ubiquity of the internet, in the future more and more people could be dismissed because of one post or picture.

“Cancelling” people discourages character development and implies that everyone has to be perfect. One of the most well known examples of this is Kanye West, who has been cancelled himself but was able to continue with his career. What society does not realize is as they are writing someone off, there is real harm to those being “cancelled.” In a June 2018 New York Times article, West talked about how being “cancelled” has impacted his career and mental state.

“[I was] really medicated, shoulders slumped down, and my confidence was gone, which is a lot of the root of my superpower because if you truly have self-confidence, no one can say anything to you,” West said.

Despite the poor mental health, West worked to regain his confidence and slowly realized the irony of his position.

“Half the people that are listening to the album are supposed to not listen to the album right now. I’m canceled,” he said.

The underlying foundation of the cancelled culture is the idea that people can not change. This, however, has been disproven many times, specifically recently with Virginia governor Ralph Northam. Northam was “cancelled” in early February for a 1984 racist photo on a page in his medical school yearbook. Society was quick to attack and call on Northam to resign for both the photo and the fact that he did not offer an apology or explanation in a timely manner, labelling him a racist immediately, but nothing in his political career has shown evidence of racism.

In fact, he has a record of speaking out against prejudice. As the governor of Virginia, Northam was faced with the white supremacist-led “Unite the Right Rally” in Charlottesville as he was running for his position. Northam was quick to comment acknowledging and disowning the protests.

“White supremacists have descended upon Charlottesville again to evoke a reaction as ugly and violent as their beliefs — just as they did before, I am urging Virginians to deny them the satisfaction,” he said in an August 2017 Washington Post article. Northam did not let his cancellation define his career and he is still the governor of Virginia, because when looking at Northam’s career as a whole it is clear cancelling him over one controversial photo was excessive and inappropriate.

Another problem with the cancelled culture is that society sometimes embodies trends that are not politically correct. In 2011, a student could not walk down the hall without seeing one of their peers in a “Cool story babe, now make me a sandwich” shirt, a slur that is misogynistic, inferring a woman’s place is to simply cater to a man. By today’s standards, anyone who owned that shirt could be cancelled when they were simply embracing a then accepted societal trend.

Instead of immediately writing someone or something off, it’s more appropriate to view the person in the larger context of his or her life. To be educated on a situation and its surroundings before an extreme measure is a more effective way to judge another person’s actions. Additionally, there is danger in these snap judgments, risking the loss of talent with the thought that only perfect people can endure. The question at hand should be if their comment or act embodies them or was it an out of character action. Not everyone is perfect and not every action should be a defining one.