Students Walk Out, Protest in DC 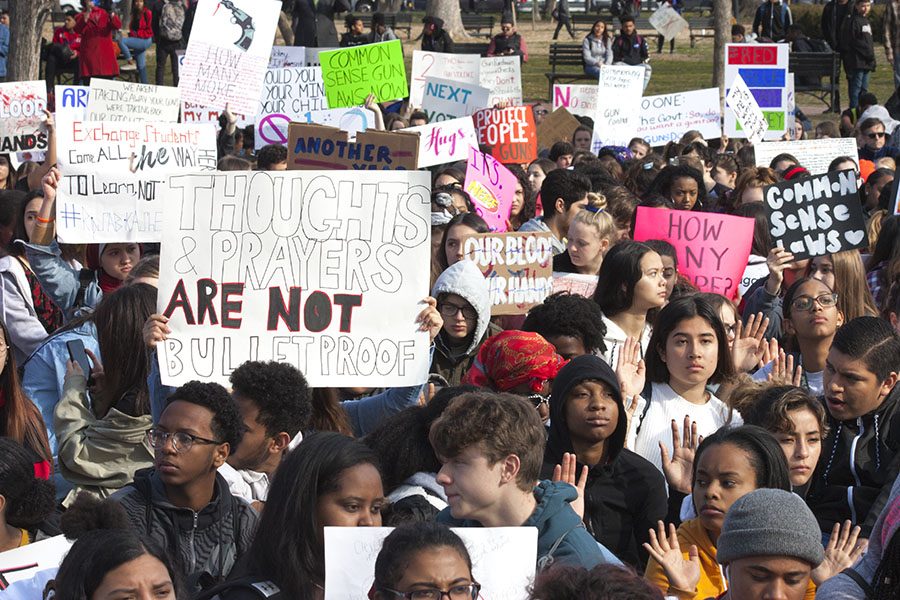 Over 3,500 students from throughout the DMV area convened in front of the White House at 10 a.m., beginning the rally with 17 minutes of silence as many workers and members of the press looked on. Students then walked down Pennsylvania Avenue, carrying signs and chanting loudly, to Capitol Hill where students gathered on the lawn behind a stage set-up at the steps of the building.

The process for organizing this march started a month and a half ago with MoCo for Change, led by co-presidents senior Dani Miller of Churchill High School (HS) and junior Michael Solomon of Springbrook HS.

“It was a long process; every speaker, every stage, all of it had to go through a very thorough security checkpoint,” Miller said. “I had to constantly be in conversation with the police officers…but the police officers like the Metropolitan Capital police were really cooperative and helpful with me which made it easier, so I was able to get it done rather quickly.”

MoCo for Change was established in March 2018 following the Marjory Stoneman Douglas HS shooting a month prior and the March for Our Lives organization was subsequently created and has garnered a vast network of members and school representatives.

A recent bill, titled H.R.8, which would require background checks for gun purchases, recently passed in the House of Representatives Feb. 27, and it now goes to the Senate for consideration.

“I am here because I came to the march last year and since the bill [H.R.8] passed in the House, it needs to pass in the Senate, so, we’re trying to make that happen,” Sherwood HS sophomore Stella Stevenson said. “Hopefully they [Congress] decide to actually do something and make more background checks and make it harder to get guns so something will actually change.”

Following the march to Capitol Hill, 18 speakers took to the stage to share their thoughts, ideas and stories.

“I think that we’ve seen throughout history that in order to evoke change we have to go against the status quo and do things against the norm,” Churchill HS senior and MoCo for Change member Ethan Greenstein said. “By walking out we are sending a message to Congress and to our school system that we won’t stop fighting until change happens.”

Speakers shared moving stories of violence, terror and sadness, as well as upfliting messages of hope for the future. Student bands played on the lawn both as students arrived and left from listening to the speeches.

“I actually did this [march] for my brothers– I have two, one is seven and the other is 11, and when I heard about one elementary school kid who had a shooting drill she wrote ‘I love you mom and dad’ on her arm and I don’t want my brothers to go through that, to tell my family that they love us before they die,” Bethesda-Chevy Chase (B-CC) senior and MoCo for Change representative Monique Lopez said. “I think our voices are often passed off as immature or not reliable because of our age and that’s not true, we are the next voters, we are going to be the biggest generation to vote, and they [adults] need to be prepared for us.”

Lopez says she helped create promotional videos with the help of B-CC junior Fiona Huxley to encourage student participation and increase numbers. The creation of the videos was a way to bolster student support as well as help apply her love of film and editing to support the cause, Huxley said.

The march lasted until 1 p.m. with the final speaker being former SMOB Matt Post who addressed a significantly smaller crowd compared to the beginning due to many students leaving.

Gun violence and universal background checks were also not the only topic discussed as other issues such as immigration, xenophobia and minority representation and acknowledgement were raised.

“This was my first walkout and I thought that it was great,” RHS junior Allison Tobar said. “It was great to see so many students join together for a cause which they felt strongly about. It was very empowering and eye opening because it shed light on issues that usually aren’t thought of when thinking about gun violence.”

Following the end of the speeches, students filed away and MoCo for Change members began cleaning up the stage and area.

“I believe in us, the power of the youth, to change our country,” Miller said to the crowd as students cheered on. “We refuse to live in fear. Yes, adults in office have failed us but we will not fail future generations, we will protest. We will vote. We will run for office and we will change this country.”