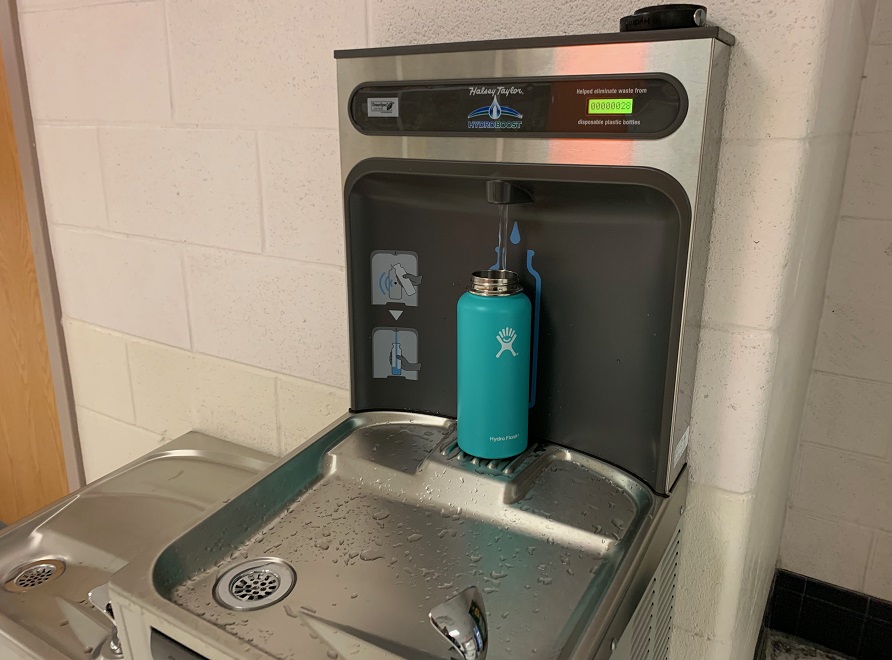 Students have started using the easy-fill water stations to fill up water bottles. The counter in the top-right corner displays the number of plastic bottles saved by using the water station. The three new stations were installed in the first week of March.

Allowing students to easily fill up water bottles, new water fountains were installed the second week of March outside the main gym, outside the main office and in the second floor rotunda paid for by an MCPS wellness grant and the Student Government Association (SGA).

The water fountain with the water bottle refill station that is outside the aux gym predated the three that were installed early March.

“I drink a lot of water. I drink a whole 32 ounce hydro flask every period… I think it’s good because a lot of people like me have water bottles and it’s hard to fill it up with the [old] water fountains,” junior Kate Holland said.

Holland told health teacher Katherine Gross how useful the bottle refill option was in the fountain outside of the aux gym. In October, Gross filed for an MCPS wellness grant for $2,000 for the purchase of three additional fountains. MCPS approved the grant for $1000 and the rest of the funds were provided by the SGA.

One of the goals of the water refill function on these water fountains is to decrease dependency on plastic water bottles, according to Halsey Taylor, the company that manufactures them. Each water fountain has a counter on it which indicates the number of times a student has refilled a bottle, which eliminates the plastic waste that the same amount of water from disposable water bottles would provide.

“It’s helped cut down a lot on plastic water bottles,” U.S. history teacher, Jillian Kennedy said. “I see a lot more students asking to go fill their water bottles with their reusable water bottles, so I think it’s cutting down on waste as well.”