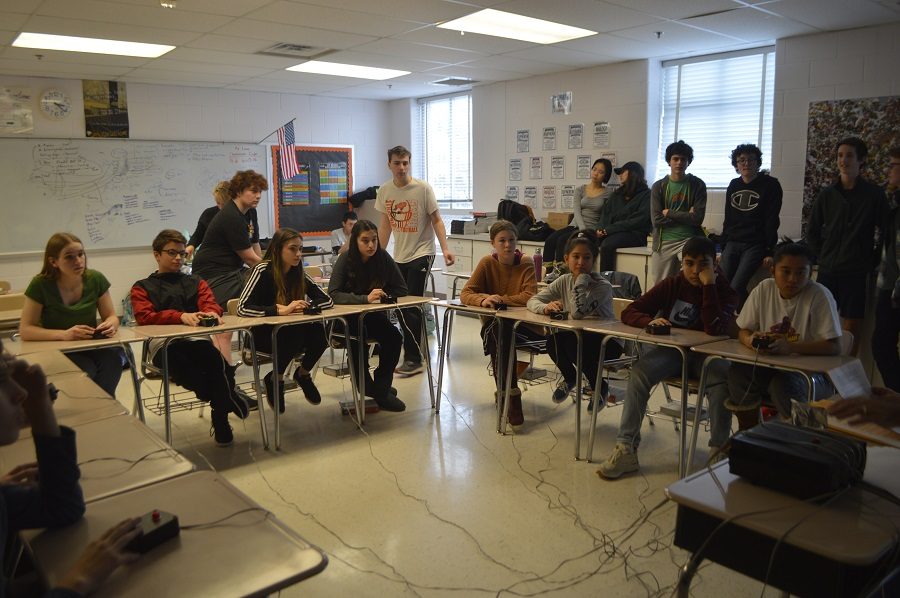 Members of the It's Academic team practice buzzing in quickly to answer questions on a wide range of topics. The team will be competing in the semi-finals May 11 for the first time in three years.

After an intense playoff match against Richard Montgomery (RM) High School (HS) and Landon HS Feb. 16, RHS’ It’s Academic televised team (A-Team) won 590–495–390 and will be moving on to the semifinals for the first time in three years.

There were nine games in the It’s Academic playoffs, which began Jan. 12 and ended March 2. Each match consisted of five rounds, starting at 10 points per question in the first round and 20 points for the other four rounds.

The RHS It’s Academic team is excited about winning playoffs, members said. The last time RHS made the semifinals was 2016, when they competed against Quince Orchard HS and James Hubert Blake HS and lost, unable to make the finals.

“I knew we could do it, but we couldn’t make too many mistakes,” sponsor David Goodrich said. “We knew that if we were going to win, we had to [buzz in] faster than they did. We had to recognize where the question was going and hit it.”

The It’s Academic A-Team had a strong start, but they started faltering mid-way through the game, causing the team to worry, Goodrich said. However, in the last round, the team was able to outdo both opponents, answering seven more questions than Richard Montgomery’s team and eight more than Landon’s.

“We had been doing well up until that point [half way through the match], but to get back, we did exactly what we needed to do,” team captain Jack Sobel said. “We got a 190 in the last round, whereas RM only got 40 points and Landon 20, so we were really able to pull ahead in the end.”

In preparation for semifinals, the It’s Academic team practices every Monday and Wednesday evening, with members who are not televised (B-Team) helping out as well.

“We all [on the B-Team] still come to practice, and we help prepare the TV team by competing against them to improve their buzzing speed,” sophomore B-Team member Julia Carter said. “We also make study sets for them to go over and practice with.”

With a drive to win semifinals, the It’s Academic A-Team will compete against St. Anselm School and T.C. Williams HS May 11 and will proceed to the finals if they win this match.

“I’d say we’ve got a very good chance at winning at the semis,” Goodrich said. “We’re kind of the wild card team; we’ve had some bad matches, but we can still take down even the best of teams.”