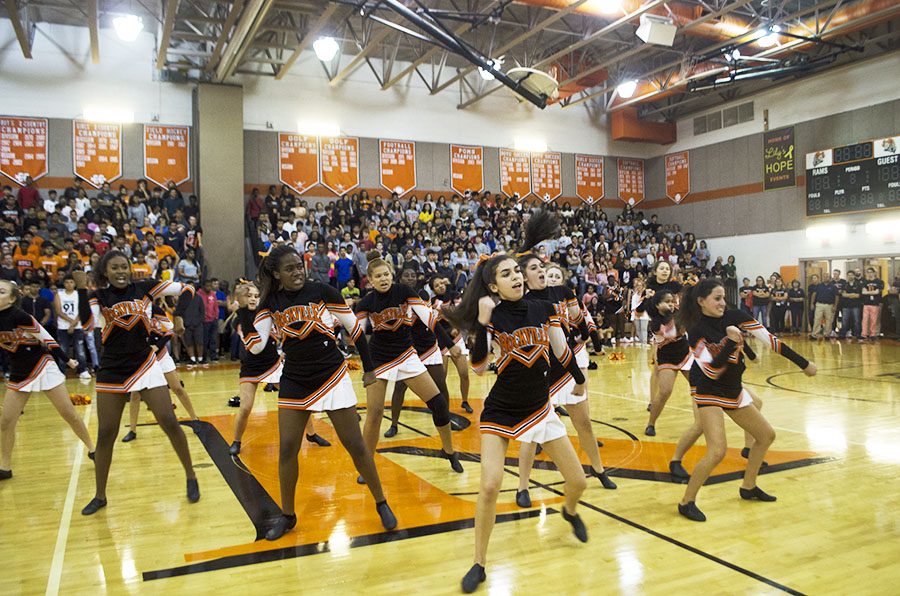 The Poms team performed at three invitationals and then competed at the county competition.

With the RHS Pompons (Poms) placing sixth overall out of eight teams at the MCPS Countywide competition Feb. 2 at Blair High School, the team is now facing the possibility of moving down a division when taking into account their last place finish last season.

Every two years, divisions for each team can change, since the two teams with the lowest scores at the county invitational will move down a division and the two teams that score highest can move up. Because of last year’s last place standing, RHS Poms could move down to division 2 for next year.

Despite placing low, the team earned the MCPS Spirit Award for the third consecutive year. The spirit award is given to the squad that exemplifies the best sportsmanship at the competition.

“A primary focus of the MCPS interscholastic athletics program is the promotion and reinforcement of good sportsmanship among coaches, players and fans,” according to the MCPS website.

The team cheered on each of their opponents at the competition, specifically the James Hubert Blake High School (HS) Poms who suffered a music malfunction and had to keep performing in silence.

While the team often performs at sporting events and pep rallies, much of their season is comprised of local competitions that act as preparation for the county invitational which determines standings for the year.

The Poms have been working throughout the school year in order to prepare for these invitationals and competitions. Invitationals are not competitions, instead they are showcases in which Poms teams from around MCPS come to show their routine, which they will perform at the final countywide competition, and receive feedback.

“Since the Watkins Mill invitational, we have really been focusing our attention on cleaning and perfecting the routine, as well as tweaking a few parts based on the feedback we were given,” Poms junior team member Julia Williams said.

“I’m proud of the team for as well as we did at the first invitational, but there’s definitely more we can work on, especially being more clean and precise with our movements,” senior Poms captain Katie Loebach said.

The Poms captains are all very involved in teaching and creating choreography for the team.

“They [Poms captains] are also role models for the other teammates as the captains are very strong dancers themselves and have much experience being on poms,” Poms coach Megan Freed said. “They are the perfect people for others to go to with questions about how things work or help on a particular dance move.”