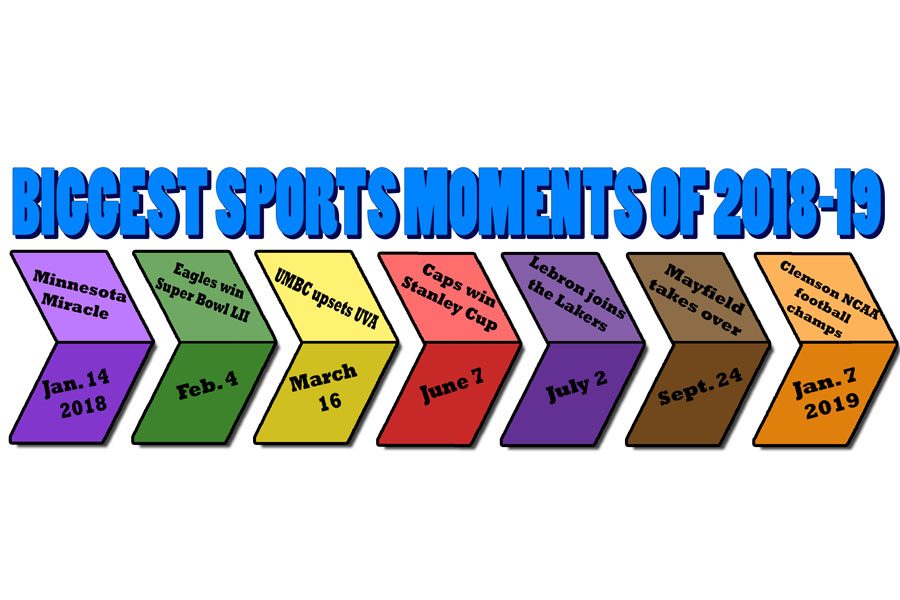 Looking back on 2018, there were many highlights throughout the year for sports at the college and professional level. Here is a look at some of the top, memorable moments of the year, some of which will continue to impact 2019 sports.

7) For the Cleveland Browns in the NFL, the 2018 season was a huge turnaround. After a two game skid, while starting Tyrod Taylor (QB) this season, Baker Mayfield (QB) came in against the Buffalo Bills to comeback and win the game. This didn’t lead to anything big but after the Browns fired coach Hue Jackson, the Browns had a huge improvement going 6-9-1, as compared  to 0-16 from the season before.

6) To start off 2018, Stefon Diggs, an alumni from University of Maryland College Park and Our Lady of Good Counsel High School in Olney, Md. caught the football on the last play of the game for a 61 yard game-winning touchdown as time expired to defeat the New Orleans Saints in the NFL playoffs. This game was the first in NFL playoff history to end in a touchdown as time expired, now known as “The Minnesota Miracle.”

5) During July of 2018, Lebron James left his hometown team, the Cleveland Cavaliers in order to sign with the Los Angeles Lakers. James’ decision led to controversy around the nation with some people arguing that now the Lakers are too powerful and a “superteam.” However, James does not care about the drama and anger that his decision may have caused. He is in Los Angeles for one reason only; to win championships.

4) To start off the new year, the Clemson Tigers football team defeated the defending national champions, the Alabama Crimson Tide 44-16 during the national championship Jan. 7. Clemson and Alabama have played against one another in the College Football Playoff National Championship for four out of the five past years.

“I knew Clemson was going to win. I made a lot of bets with people who picked Alabama to win but I am not a bandwagoner. Trevor Lawrence [Clemson Quarterback] is too good,” Senior Jeffery Gomez said.

3) The Philadelphia Eagles defeated the New England Patriots 41-33 Feb. 4 in Super Bowl LII. Nick Foles, the quarterback for the Eagles, completed 28 of 43 passes for 373 yards, 3 passing touchdowns and 1 interception, and was named the Most Valuable Player of the game.. He even ran a play called the “Philly Special” in which he ran down the field and caught the ball for a touchdown. The Patriots were highly favored to win this game; however, the Eagles came out on top as the underdogs for their first Super Bowl win in franchise history.

2) March Madness 2018 was a huge bracket buster. The 16 seed University of Maryland – Baltimore County (UMBC) Golden Retrievers defeated the number one seeded Virginia Cavaliers 74-54. Not only did the underdogs defeat one of the best collegiate basketball teams in the nation, but they blew them out and dominated on the court, beating them by 20. This was the first time in history in which a 16 seed upset the 1 seed in the NCAA Men’s Division I Basketball Tournament.

1) The Washington Capitals defeated the Las Vegas Knights in game 5 of the NHL Stanley Cup Playoffs to win the first ever Stanley Cup for the franchise. The game was played May 7 and was the first major professional title in all of D.C. sports history during the 21st century. D.C. celebrated with viewing parties at Capital One Arena in D.C. when the Capitals were playing away, as well as a parade after the Capitals won the cup.

Living in Washington DC as the Capitals won the Stanley Cup is a once in a lifetime opportunity that most people do not ever get to experience.

“The Capitals winning the Stanley Cup was super memorable and being a part of D.C. at the time was amazing. They made history for D.C. and I got to be a part of the experience,” junior  Monica Blassou said. ”The opportunity was once in a lifetime and my team winning was really special because I have been rooting for them forever and seeing how far they have come was surreal.”

Junior Madhav Pillai is excited for what sports highlights 2019 has in store.

“2019 is going to be a great year for sports. The competitiveness of each sport is only becoming better. I am really looking forward to March Madness especially as it is really fun to make a bracket and see which games you got right, and which games you got wrong,” Pillai said.