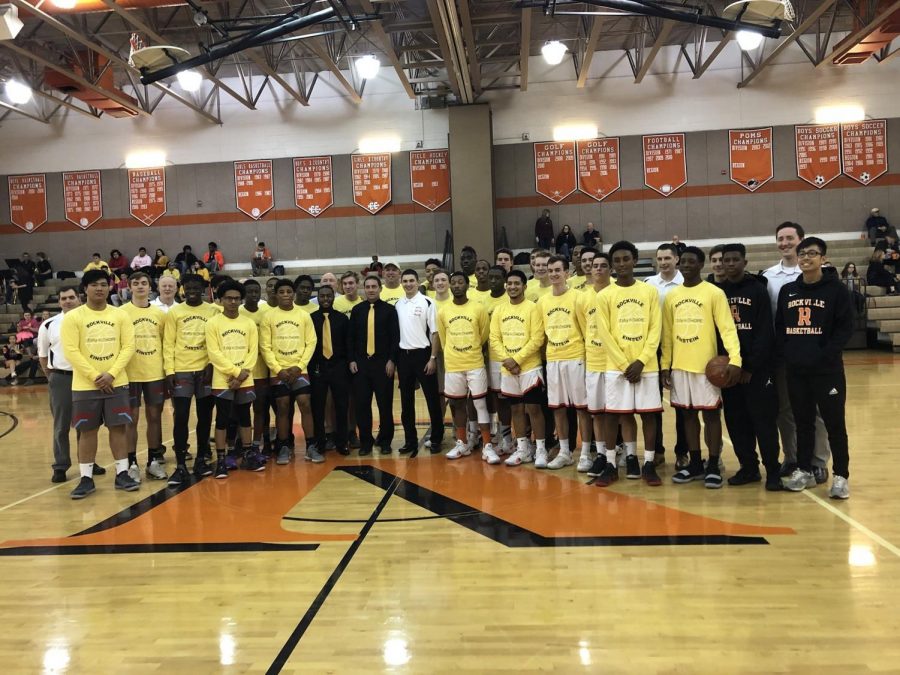 Rams boys and girls varsity basketball teams fell to the Einstein Titans Feb. 8 in the annual Lily's Hope basketball event, which raised over $1,000 to support cancer research and families affected by cancer.

Varsity boys (10–9) and girls (11–8) basketball teams took the court to play the Einstein Titans at home Feb. 8, while fans, many dressed in yellow and pink Lily’s Hope shirts from this year and past years, steadily flooded the gym.

The rafters were full of excitement and cheering loud enough to be heard from the concession stands, all to support Lily’s Hope, an annual event that raises money to support cancer research and families affected by cancer.

The event originated to help physical education teacher Frank Weaver when his youngest daughter, Lily Weaver, was diagnosed with cancer in 2011, and though she has beaten cancer twice, Lily’s Hope has continued as a Rockville tradition.

“[Lily’s Hope] means so much to the Weaver family and it’s become a community event,” athletic director Michael Hayes said. “This is our seventh year and every year the event keeps growing.”

“[This game] definitely feels more important,” junior forward Jailen Anderson said. “It’s for a really good cause so of course we want to go out there and play our best.”

This was the first year in which the direct proceeds from the event did not go to any family in particular; therefore, all proceeds are going to the Patty Pollatos Fund, a non-profit organization that raises money to help families deal with the financial burden caused by cancer, spinal cord injuries and heart, liver or kidney transplants.

Though the night’s focus was on raising money, players from both varsity teams entered the game looking to improve their records, but suffered disappointing losses, they said.

The boys were down early in the first quarter, but were able to bring the game back within reach, finishing the first half trailing the Titans 18–15. The boys kept the game close for the entire second half, but they were plagued by shooting struggles and turnovers, preventing them from completing a comeback.

The girls similarly started off slow, struggling to score throughout the first half and allowing the Titans to secure a large lead. They were down 29–14 during the third quarter when two consecutive three point shots made by junior forward Aimee Sunier helped energize the team. The Rams ended the quarter on a buzzer-beating score to cut the Titans’ lead to eight.

The girls third quarter push was stifled by scores from the Titans early in the fourth quarter which drove the game out of reach. Though they were defeated, spirits were still high in support and pride for Lily’s Hope.

“Playing in this game is always very special to us as a team,” junior center Bre Daley said. “[Frank Weaver] was our most recent coach so we are always happy to support him and his family.”

The Rams’ next game is away against the Wootton Patriots Feb. 22, with the boys playing at 5:30 p.m. and the girls playing at 7:15 p.m for their final game of the regular season.