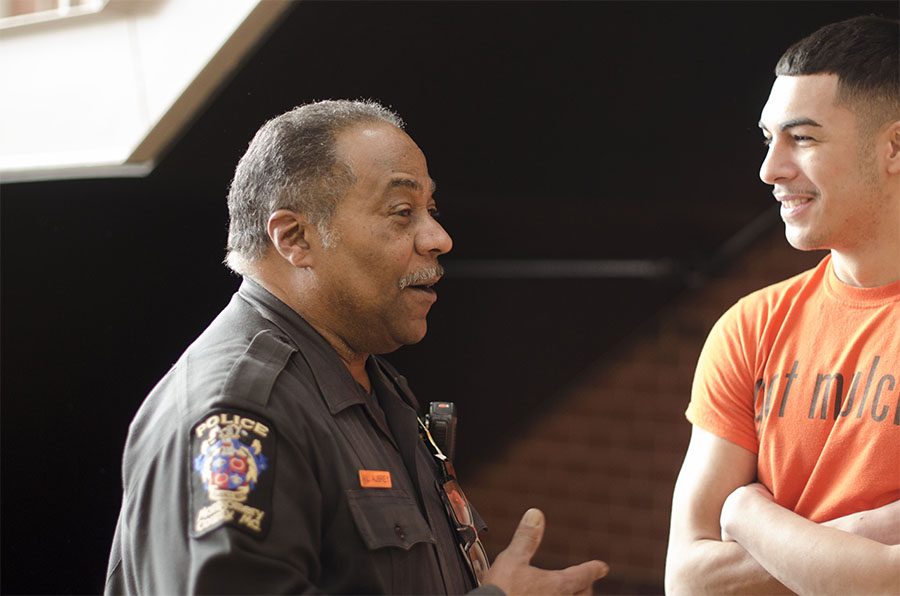 Officer Arnold Aubrey chats with students in the hallway as he makes a concerted effort to get to know students and staff in the building. He joined Rockville HS in January after serving as SRO at Poolesville HS.

The introduction of School Resource Officers (SRO) to MCPS high schools has improved safety and peace of mind by providing a feeling of security for students and staff.
But beyond just being a safety measure, the officer should be a familiar face to students because beyond being the one person in the building with an armed weapon, the connections an SRO makes further provide a sense of security to the students and staff.

The SRO program began in 1950, originating in Flint, Michigan. Despite an over 50-year existence, the program was fully introduced to MCPS high schools in the fall of 2015. Prior to this, only 12 of 25 high schools had officers present which were supported by the cities of Rockville and Gaithersburg and the county sheriff’s department.

When an SRO does not have a prominent presence in the school, students may wonder about their purpose. RHS started the 2018-19 school year with officer Robert Jacaruso, who was rarely seen in the hallways. After Jan. 2 Jacaruso was reassigned and officer Arnold Aubrey succeeded him, Aubrey has engaged with students and staff highlighting the importance of a strong SRO presence.

Students said they noticed a constant effort by officer Aubrey to connect with the community by introducing himself to unfamiliar faces, chatting with administrators and staff and simply smiling and waving at passing people in the halls.

Although this may seem like standard procedure for an SRO, these actions are unfamiliar to RHS students this school year since the previous officer was rarely seen in the halls and known by few students. An SRO’s job is to help keep the school, and those inside it, safe. Officer Aubrey has quickly become a familiar figure in the school, but the prior SRO was not a strong presence in the building.

MCPS needs to continue to ensure that SROs fulfill they’re expected purpose in the building because of the many positive effects they provide to students.

“Our SRO’s — the ones that have been in our buildings — have been more than just a person with a badge,” MCPS spokesperson Derek Turner said in a June 6 2018 WTOP article “They’ve been someone who the students can talk to and engage with.”

Officer Aubrey has barely completed a month as the assigned officer to RHS and has already done exactly what Turner stated. Aubrey embodies the idea of safety by making himself and his responsibilities felt throughout the community.

RHS students and staff should express great gratitude to officer Aubrey and not take for granted his outgoing ways, because our community has seen the difference an SRO can make in overall atmosphere of the school.