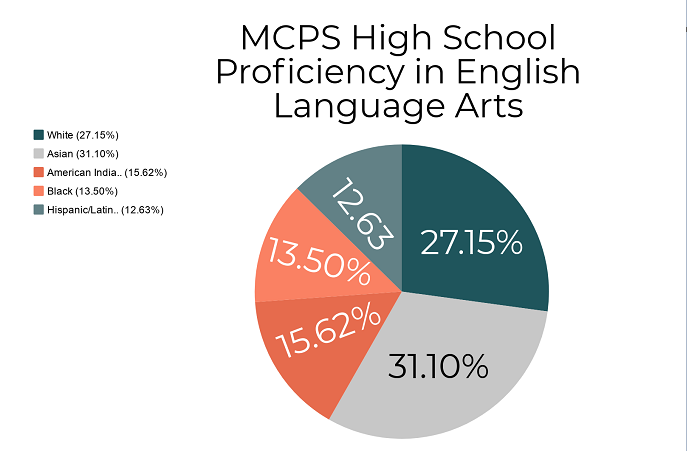 The Maryland State Department of Education (MSDE) unveiled an accountability report card Dec. 4, designed to measure the success of every public school in Maryland and identify areas for improvement. Under the revamped model, Rockville High School (RHS) was awarded four out of five stars.

After awarding points for each factor, each school was then assigned a star rating ranging from one to five stars.  Schools with 75 percent or more of the possible points were awarded five stars, and cutoffs were 60 percent for four stars, 45 percent for three stars, 30 percent for two stars and less than 30 percent for one star.

Each school was also given a percentile rank, comparing its performance to all other Maryland schools of the same level.

RHS received a total of 60.2 points, ranking in the 63rd percentile, but struggling in both academic achievement (16.8 out of 30 points) and school quality and student success (15.9 out of 25 points).

After scores were released, the RHS leadership team met Dec. 11 to review the data.

“We looked at where in the report card we scored the lowest and what our data is and where our work is,” staff development teacher Lisa Gerhardt said. “That’s all we’ve done at this point.  But as we move through the spring and begin looking at our school improvement plan, we will use that information to guide us.”

Changes to the annual report card come in response to the requirements of the Every Student Succeeds Act (ESSA), a federal law that seeks to ensure public schools provide a quality education for all children.  Parents, teachers, superintendents, students and advocates were all involved in the creation of the new system, which relies less on test scores as a measurement of school success.

MCPS Superintendent Jack Smith said at a November press conference that he doesn’t believe the report card is indicative of a school district’s success because the MSDE could only use data that was comparable across all school districts.

“While the Report Card does provide important information about our schools, its selected data points must be comparable to other districts and therefore, provides a limited view into the progress of our nearly 163,000 students,” Smith said in a message emailed to the MCPS community  Nov. 30.

Other critics believe the star rankings are too simplistic and could unfairly brand struggling schools, rather than help them improve.

“Ratings don’t turn around schools,” said president of the Maryland State Education Association Cheryl Bost in a Dec. 4 Washington Post article. “It’s the educators, parents and local communities who do that.”