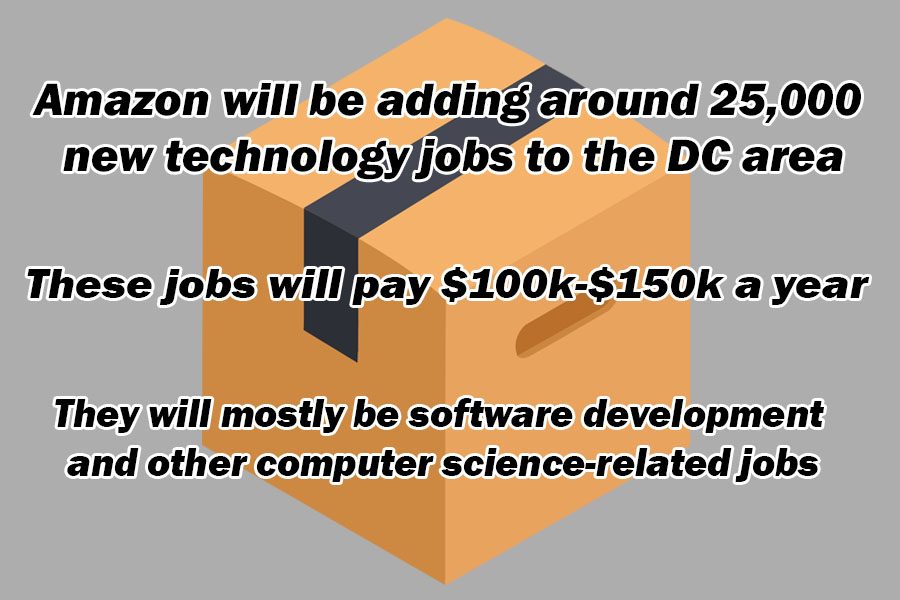 Amazon announced Nov. 13 it is opening its second headquarters in both NY and VA, bringing 25,000 jobs to the DMV area.

The new headquarters, dubbed “HQ2,” is on track to bring up to 25,000 white collar technology jobs. These jobs, which are mostly involved with software development, are expected to be highly lucrative; almost all software engineers working at Amazon earn six-figure salaries, according to job search site Glassdoor.

Amazon’s decision comes during a wave of expanded interest in STEM careers. At George Mason University in Fairfax, Va., enrollment in computer science programs has doubled over the past five years, according to a Nov. 18 Washington Post article. This increase has been reflected nationally as well; one third of college freshmen in 2000 planned to study science and engineering–that number rose to nearly 45 percent of all freshman by 2016, according to a 2017 study by the Higher Education Research Institute at the University of California, Los Angeles.

“The arrival of Amazon will further remind students that computer science is the future and is where the majority of well-paying jobs are,” computer science teacher David Baker said. “Computer science is a requirement for anyone going into STEM-related fields; it now takes up to 60 to 70 percent of all new STEM jobs.”

Science and engineering jobs, especially concerning software and computer development, can be appealing to many students because of the technology involved and salary. The average annual salary for software engineers at Amazon is $108,785 and Amazon’s software development managers average $140,000, according to hundreds of Glassdoor reviews made by Amazon employees.

“I am definitely considering working for Amazon at their new headquarters because we’re living in such a digital society,” senior Jarrett Clark said.

Getting a job with Amazon, however lucrative, will require hard work and specialized knowledge.

“In order to work at Amazon, students need to find what specifically they’re interested in, whether it be computer science, software development or something else,” College & Career Information Coordinator Janet Harris said. “They need to be very well-versed in their own field and have the necessary qualifications, which may include a college degree, for their line of work.”