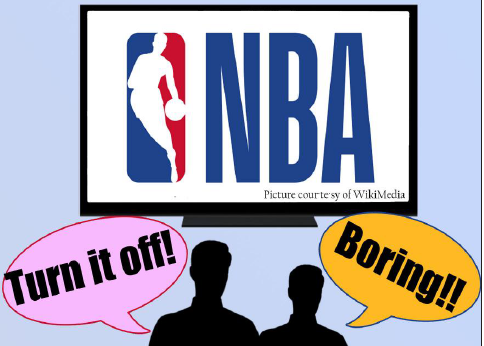 For years NBA viewing has been in steady decline and it is of their own doing. The league can make a few simple changes to draw larger crowds starting with restrictions on defense.

The National Basketball Association (NBA) has lost its entertainment value through the years, as the lack of parity and defense has simply made it boring to watch, making some fans switch to watching college basketball. The NBA should reduce the number of games played to make the league as fun to watch as it once was in the early 2000s.

Ever since NBA commissioner Adam Silver raised the player salary cap from $84 million to $94 million in 2016, the NBA lost the little variety it had when the super team Golden State Warriors signed all-star Kevin Durant. This move made the NBA too predictable and makes the playoffs seem useless as there is now a big difference in records between teams that are contending and those that are not.

College basketball is more entertaining for fans because the stadiums are more crowded with fans during the games. In some cases, college teams actually have more fans in the stadium compared to their NBA counterparts. In fact, the University of North Carolina’s (UNC) men’s basketball team averaged 18,378 fans in attendance at their games for the 2017-2018 season, while the Charlotte Hornets, who are two hours away from Chapel Hill, averaged 16,375 fans in attendance for their games during the 2017-2018 season, according to Statista, a statistics company.

While UNC is one of the most popular college teams in the nation, it is embarrassing for a college team to outsell a professional NBA team. To be able to get those ticket numbers back up, the NBA has to make the league more interesting again. They need to provide the energy at all of the 1,230 regular season games in the NBA every year. While part of the NBA’s demise is the fans’ fault, the NBA needs to step up and make their content exciting and suspenseful if they want to get their fan base back.

Additionally, college basketball is more interesting to watch than the NBA is because of the defense, something the NBA lacks. With West Virginia’s aweing press defense and Syracuse’s near perfect 2-3 zone, defense makes college basketball the most entertaining type of basketball to watch. The NBA had zone defense banned until 2002, but then the then-NBA commissioner David Stern allowed zone defense to be played among NBA teams. The NBA banned zone defenses early into their existence because they felt like it slowed the game down and decreased the possibility of offensive playmaking, but now fans know that is not the case. But to this day, zone defense is rarely played in the NBA because teams are talented enough to shoot and make three pointers at a 40 percent rate.

Many sports analysts argue that more NBA teams should play more press and zone defense. That is just preposterous. Rick Pitino, former Boston Celtics coach and general manager from 1997-2001 tried to implement a press defense, but it did not work because the players would eventually get tired sprinting the length of the court and back. It also was not helpful that they played a press defense for 82 games a year for three full years, which no doubt tired the Celtics players out. A solution for the NBA to increase the entertainment of the league is if they decrease the number of regular season games which could open the possibility of more variety in defensive strategies for teams throughout the league.

The NBA used to be such an entertaining league to watch. With all of the different teams that were able to win in the past few decades, it made it seem like every game mattered. But ever since LeBron James joined the Miami Heat in 2010, the NBA has been predictable.

Kobe Bryant, Kevin Garnett, Tim Duncan, Allen Iverson and Steve Nash; these are the players who defined the 2000s. That was a time when the NBA was at its most competitive and most entertaining. In order for the NBA to be as entertaining as it was during this time, the fans need to be hooked, hanging on every game. If the NBA doesn’t make changes soon, they won’t matter because no one will be left watching.