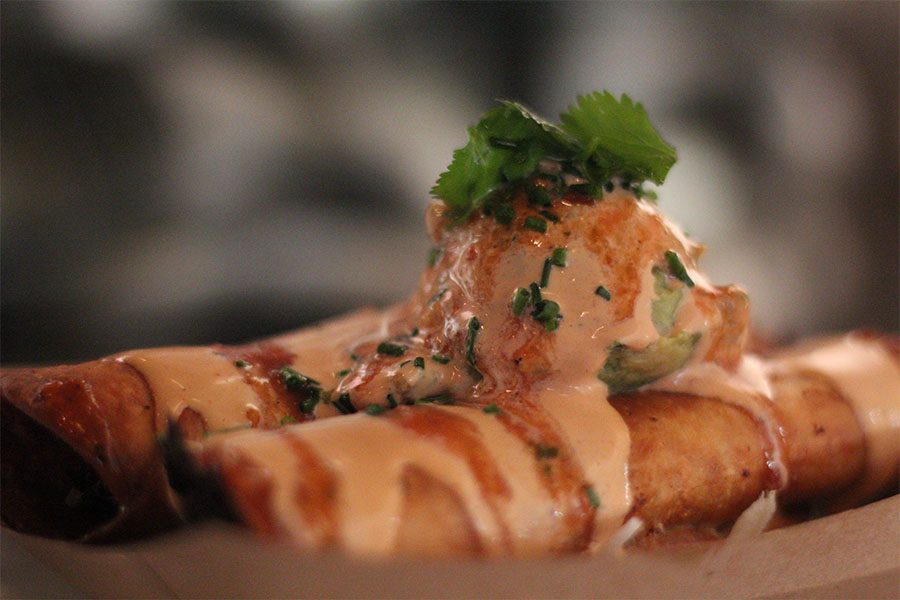 A feature dish at Slapfish is the lobster taquito drizzled with "Awesome Sauce."

Starting in Huntington Beach, Calif., Andrew Gruel saw that there was a gap between high-end seafood restaurants and low-end fast food restaurants, so he set out to provide his customers with “fish so fresh it’ll slap you,” and named his business accordingly.

Not only is the fish served at Slapfish fresh, but it only takes a week on average for the fish to get from local fisheries and international purveyors to the customer’s table.

One of the more popular items on the menu is the shrimp roll, which is grilled or fried shrimp packed into a split top butter roll, with a sauce of your choice. Starting at $12 the shrimp  roll gets the job done in terms of satisfying hunger at a reasonable price.

“I like how you get to choose how they do your shrimp,” sophomore Josh Lee said. “It’s honestly the best item on the menu.”

There is a fish-of-the-day special combo which ranges from salmon to mahi-mahi. Some of their many unique dishes include Lobster Grinder, Chowder fries, Shrimp Rolls and Fish Tacos.

“Once you walk into the restaurant you automatically get the vibe that you are at the waterfront,” senior Henry Jones said. “The restaurant just has a positive atmosphere.”

Out of the 12 locations, the restaurant located on Rockville Pike was the first Slapfish to make it to the east coast. A second opened in Orlando, Fla. Oct. 19, and there are plans to open up several other locations in Ashburn,Va., Hilton Head, S.C. and Washington D.C.

With other seafood restaurants like Cameron’s Seafood and Live Crawfish & Seafood on Rockville Pike, Slapfish still continues to stand out, making it the students’ choice.