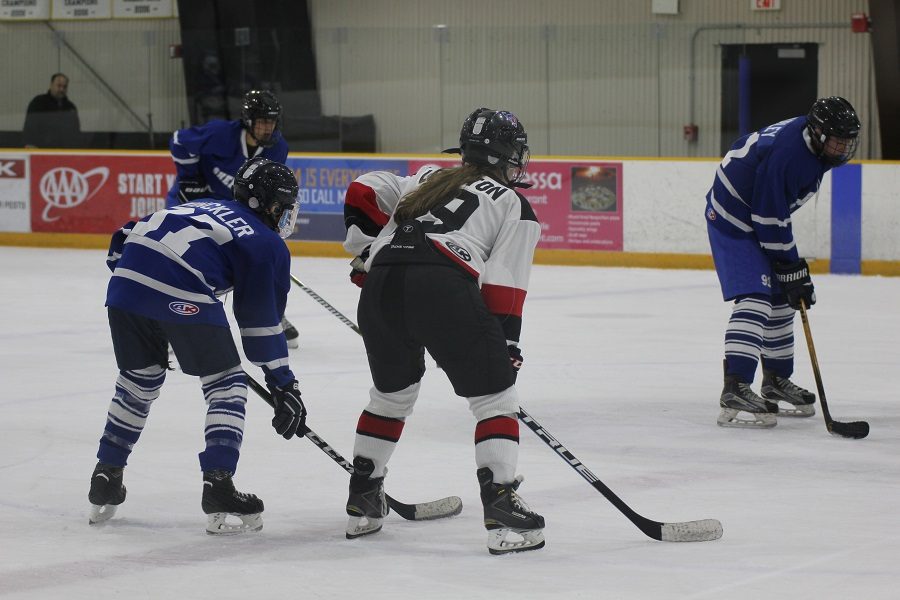 Sophomore Evelyn Leighton (center) skates against the Sherwood Warriors Nov. 7. She joined varsity this year after playing for JV as a freshman.

Sophomore Evelyn Leighton has grown accustomed to breaking boundaries. As one of only two girls on the Rockville and Magruder (RAM) ice hockey team, and the only girl on the roster last year, Leighton uses her strength and determination to ensure no one treats her differently and that she continues to push her limits.

Leighton is going into her second season for the RAM hockey team and is currently in her fourth season playing for her club team, the Tri-City Eagles, based out of Laurel, MD. Although the RAM team is made up primarily of students from RHS and Magruder High School, the team is also made up of high school students from the Charles E. Smith Jewish Day School (CESJDS), St. Andrews Episcopal School (SAES) and The Heights. Leighton played on the junior varsity (JV) RAM team last year and also plays varsity lacrosse, where she was one of two freshman to play during the 2018 season.

Leighton has been watching ice hockey her whole life, so when she learned of the program at Tri-City, she immediately joined, she said. She practices with her club team four to five times a week and has around two games on the weekend during the season.

“I just enjoy the game itself,” she said. “It’s such a fast-paced game [and] it’s such a technical game; you really have to know what you’re doing so you don’t get hurt.”

For Leighton, the transition in high school from an all-girls club team to a co-ed (but previously all-male) hockey team was initially a difficult adjustment.

“It was a little weird at first [on RAM hockey] because I was the only girl last year.  It took a little bit for the guys to start talking to me and actually treating me like a teammate,” Leighton said. “But we had off-ice practices all throughout the beginning of the school year, so I went to all that, got to know everyone and [it] became a whole family thing.”

Building relationships on the team took time and so did the adjustment to different rules on a co-ed team.  All-girls teams are not allowed to check, yet co-ed and all-male teams are allowed to, so physically, Leighton had to adjust to the different sets of rules.

“It was more intimidating in the beginning [playing against boys], but after a while, once I accepted I wasn’t going to be the best out there, I started focusing on what I could do better to be better. Playing against them definitely does push me to be better,” Leighton said.

Leighton uses this physical and mental challenge as a way to push herself and elevate her playing.

“Evelyn brings a relentlessly positive attitude to every game and practice, and her obvious love of the game rubs off on all of her teammates and coaches,” RAM head coach Steven Dell’Acqua said. “On the ice, Evelyn is very sound positionally. She always is in the right place on the ice and contributes on offense and defense, which is something that many young players struggle with.”

Leighton is still a young player on the team but knowing upperclassmen and having a set group of friends has helped her adapt to the challenges of the co-ed varsity team. Last year, she tallied one career goal and one assist for the JV team.

“She’s [Evelyn] always been really good at getting the puck deep and getting through players and she’s got a strong backhand shot,” sophomore JV and varsity wing hockey player Zane Folts said. “Everyone’s usually a bit bigger than her and some teams we face are very physical and she can get knocked down sometimes but she’s always back on her feet.”

Although she is still an underclassmen, Leighton said she plans on enlisting with the Army after high school, though if she were to attend college, she plans on finding a school with a girls hockey program to continue playing her game.