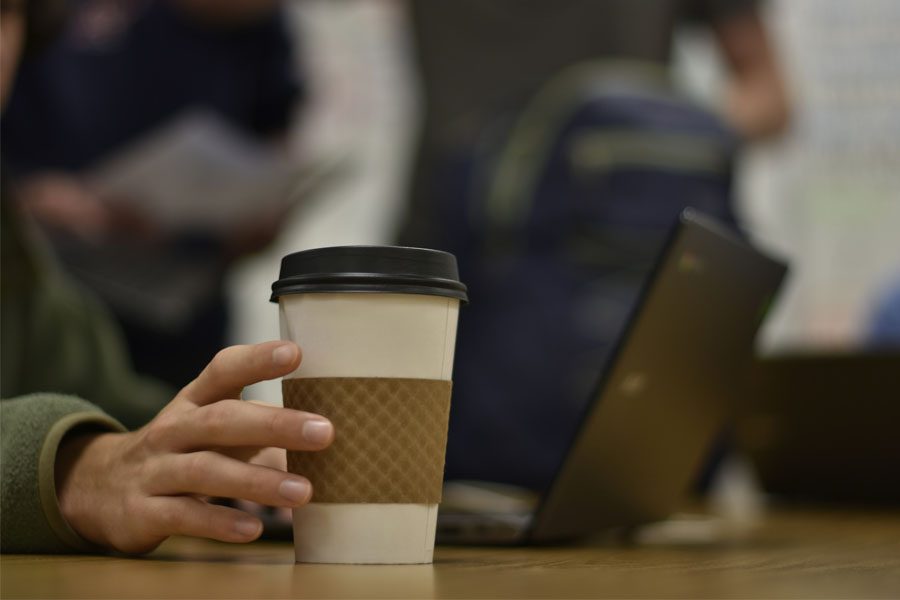 By drinking a cup of coffee in the morning, students said they hope to make up for a lack of sleep the previous night and have enough energy to make it through the entire day of school.

Caffeine has become the “brain fuel” of today’s society, helping Americans keep up with the fast pace of daily life.  But this increased dependence on the stimulant isn’t just limited to working adults; more and more teenagers have begun turning to coffee for extra energy to start the school day.

A 2016 study by the Journal of Nutrition Education and Behavior found that 83.2 percent of teenagers consume caffeinated beverages regularly and at least 96 percent consume them occasionally.  This can be seen all throughout the halls of RHS, as students walk from class to class with backpack on and coffee cup in hand. Some students started this routine of drinking coffee as early as freshman year.

“I’ve made myself coffee every morning for so long I don’t even think about it anymore,” senior Brian Reyes said. “It’s always in my hand when I walk out the door.  If I ever forgot it, I don’t know what I’d do. I need it to give me the energy to make it through the day.”

In small doses, caffeine can be helpful, enhancing mood and alertness and increasing information processing speed and reaction time, according to Newport Academy.  But too much caffeine can cause a number of unwanted effects, including insomnia, restlessness, headaches, difficulty concentrating and increased blood pressure.

And when teenagers begin drinking coffee at such a young age, they risk forming an addiction, needing more and more to get the same effect and experiencing withdrawal symptoms when they stop drinking it.

This is because caffeine closely resembles adenosine, a molecule naturally present in the brain that produces a feeling of tiredness when it binds to its receptors. After drinking coffee, caffeine will bind to the brain’s receptors instead of adenosine, effectively blocking them off and making people feel more awake and alert.

So for people who drink coffee on a daily basis, the brain’s chemistry and physical characteristics actually change as a result, growing more adenosine receptors in an attempt to maintain equilibrium with the constant onslaught of caffeine.  This is why coffee drinkers build a tolerance over time, requiring more caffeine to block the necessary proportion of receptors and achieve the desired effect, according to a 2013 Smithsonian Magazine article.

Psychology teacher Christine Zafonte is one of many adults who has experienced these chemical reactions.  While she began drinking just a cup of coffee on Sunday mornings when she was younger, she has since become an avid coffee drinker, experiencing withdrawal symptoms when she doesn’t have her cup of coffee to start the day.

“I really only need a cup—I don’t need ginormous cups—but as the week goes on I need more and more,” Zafonte said. “I can’t start my day without it. It actually motivates me to get out of bed on the weekends. If I don’t have it by 10 a.m. I get a horrible headache and can’t concentrate.”

Like Zafonte, not all students began drinking coffee for energy purposes, but they have still formed the same addiction as those who did.  Senior Barrie Pasternak began drinking coffee because of the social aspect, meeting her friends at Dunkin Donuts on Sunday mornings to chat about the night before over iced coffee and breakfast sandwiches.

“The first time I had iced coffee was because one of my friends was tired and wanted to get Dunkin before we hung out, but it has since become kind of a tradition.  You can always find us at our table at Dunkin on Sundays—they know our orders as soon as we walk in because we’re there so often,” Pasternak said. “And it’s led me to become a big coffee drinker on my own.  I drink it almost every day before school now.”

Regardless of why students began drinking coffee, one thing is certain: it’s addictive.  Those who drink it regularly need it regularly.

“The day I dropped my coffee on the way to first period was one of the worst moments of my life,” junior Jackie Cao said. “I was depending on that coffee to make it through the rest of the day.  And it was gone, just like that.”