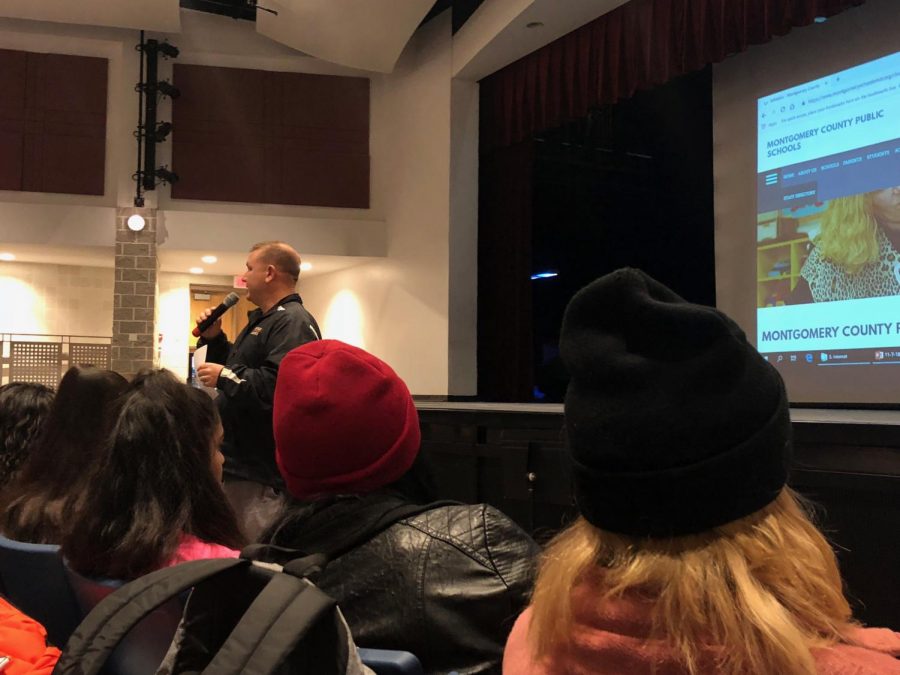 Athletic director Michael Hayes addresses fall athletes in the auditorium about hazing. Recently allegations of hazing have arisen at some MCPS high schools.

An anti-hazing and bullying prevention slideshow was presented by athletic director Michael Hayes to all fall athletes Nov. 16 during lunch in the auditorium. The presentation, distributed by Montgomery County Public Schools (MCPS), covered bullying, harassment and hazing guidelines and is being presented to every school in the county.

The goal of the presentation was not to teach students anything new, Hayes said. The purpose was to enhance and refresh information about bullying and hazing that students have already known. The presentation acknowledged the rape and attempted rape charges against five Damascus JV football players and addressed the severity of actions such as targeting underclassmen for RHS teams.

“I think people are re-framing their mindset. It shouldn’t be a natural tendency to say ‘hey freshmen,’” Hayes said. “I think, ‘hey, all the wide receivers on the football team get the water today, all the linemen pick up the equipment.’ That way you’re not picking out a certain group based on their age, identity or class.”

The presentation included resources such as how to identify hazing, its consequences and how to promote a healthy and safe environment on a sports team, all of which are available on the MCPS website.

“When I was an underclassman, I never really experienced any kind of hazing. The football team has always had a pretty close relationship,” senior varsity football player Colin Gabele said. “I personally think that the healthiest bonding technique is just being around your team both inside and outside of school.”

Educating students and coaches on how to identify hazing rituals is the best way to prevent them, head varsity football coach Jason Lomax said. Promoting family-like relationships between players is key to prevent bullying and harassment.

“I have only experienced hazing as a player myself back in the 90s,” Lomax said. “Students need to know the adults who are in charge are here to protect them and keep them safe.”

Also in the meeting’s attendance were multiple fall sports coaches and several administrators, including principal Billie-Jean Bensen. A similar slideshow will be presented to winter athletic teams by coaches later in the year.

“It’s new, something came up, we wanted to address it, we want to take the lead on it rather than hiding,” Hayes said. “I think the school’s a special place and I think we do a pretty good job. We’re all in this together, and I think that message is pretty strong too.”