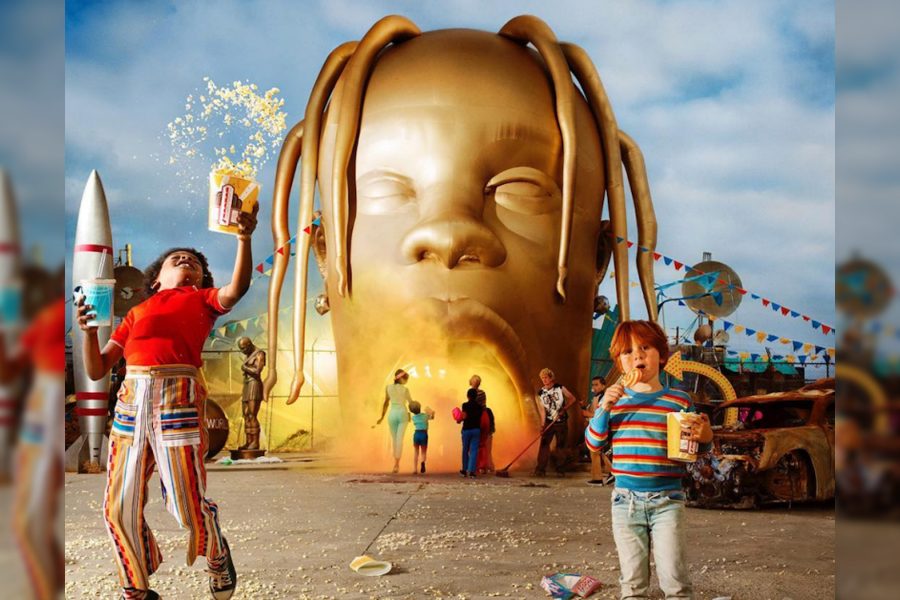 Jacques Berman Webster II, professionally known as Travis Scott, moved to New York City (NYC) in an attempt to start his music career immediately after dropping out of college.

Scott has released two albums before the release of “ASTROWORLD.” His most recent release was 2016’s “Birds in the Trap Sing McKnight” which debuted at number one on the U.S. Billboard 200 and sold 53,000 copies in the first week. Looking to build on his second album’s success, Scott began work on “ASTROWORLD,” in which the album takes its name from a closed amusement park in his hometown of Houston.

“ASTROWORLD” was released Aug. 3, and it has proven its lasting power being played by students and fans alike through the summer and now this fall. The album consists of 17 songs and was certified Gold Aug. 14 by the Recording Industry Association of America (RIAA). This latest project also secured the second-highest debut of 2018.

“ASTROWORLD” at first listen can come across as mediocre. Social media hyped the release but on the surface it was ordinary and plain. In the fifth song of the album, “STOP TRYING TO BE GOD,” Scott says, “You won’t succeed tryna learn me, stick to the roads in my journey.” This line refers to the journey to fame that Travis endured getting to where he is now. He dropped out of college when he was a sophomore to pursue his music career, and lived at his friends’ homes after concerts. He wants his listeners to look at where he is now, and get through the hardships of life in order to be successful. For first time listeners, it may take a few listens in order to appreciate the Scott’s genius lyrics.

The variety of different features on the album elevates the album to a level sure to capture many hip-hop fans’ attention. Featured artists such as Gunna, Drake, Nav, Frank Ocean, Swae Lee, Juice WRLD and Sheck Wes add a lot of depth to the project, while also attracting their own fans to Scott’s album. “CAN’T SAY” stands out as Scott trades verses with Don Toliver as they both show off their high pitch vocal range mixed with their smooth flow.

Scott has a wide range of vocals, and the fade of pitches in his voice creates depth in his singing, but many listeners will credit that to autotune. His voice is not drowned in autotune, but, some argue that his repeated switch of pitches makes his sound get old.

The rappers’ use of autotune, while a point of contention to some, does not matter to others who have been listening to the album since the summer.

“‘SICKO MODE’ and ‘YOSEMITE’ are the best songs on the album,” junior Madhav Pillai said. “Scott, Drake and Gunna are all standout rappers and they really click on these tracks making them worthy of the hype and lasting power of the overall album.”

Travis Scott is moving up at a rapid speed. Since the release of “ASTROWORLD,” there seems to be a new excitement surrounding him and many are hopeful about his future prospects in hip-hop.