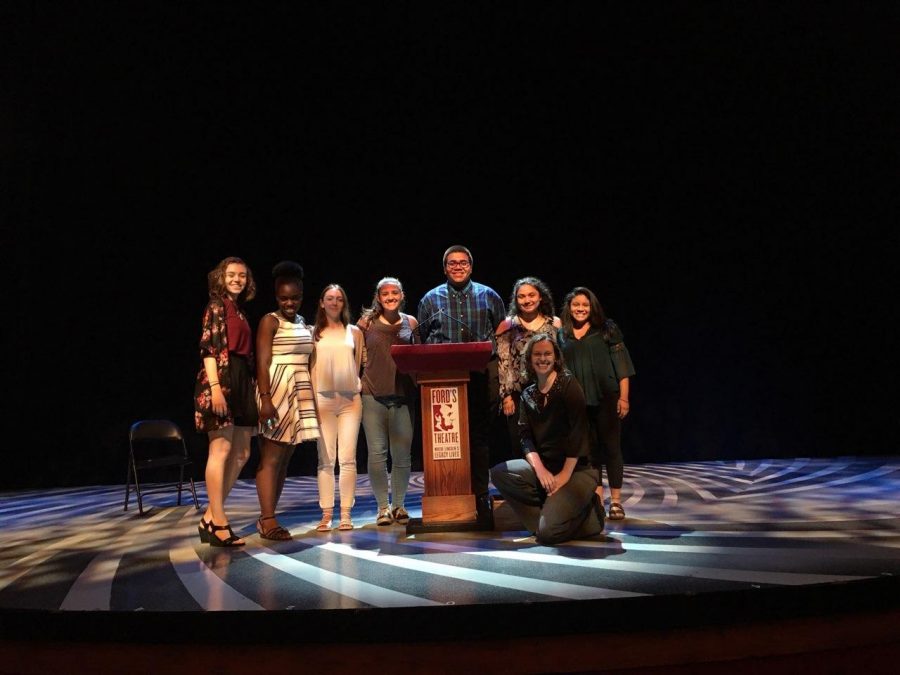 AP Lang juniors stand with English teacher Krista McKim on the Ford's Theatre stage where they delivered speeches at the Oratory Festival May 21.

Eight juniors participated in the Oratory Festival held at Ford’s Theater May 21, performing speeches originally written as a part of their Advanced Placement Language classes with one student earning the highest honor or performing this speech to the Ford’s Theater board of directors in June.

Loebach spoke about communication and her struggles with it, though she never imagined presenting it to a real audience.

“When I originally wrote the speech, I never even intended to read it at the Schoolwide Oratory festival, much less at Ford’s Theater,” she said. “However, I’m really glad that I took this opportunity, because it proved to be extremely rewarding and showed me that I’m actually a much better speaker than I thought.”

“I thought I did well, but I think there is always room for improvement. If I could do it again I would work more to make sure my memorization was spot on,”  Balfour said, whose speech focused on not fitting in and conforming to societal expectations.

Of the eight performing students, Melgar was chosen to present to the Ford’s Theatre Board of Directors’ meeting. Only two students throughout the nation who performed at Ford’s were chosen for this next and final step in which they will perform their speeches to the board of directors June 11.

“I decided to write my speech to let others know that they can be whoever they decide to be regardless of their ethnicity and or background,” Melgar said. “No person or stereotype should decide their destiny,” Melgar said.

The speeches were first read in English teacher Krista McKim’s class and at the school festival for AP Lang students, with the intention of later presenting at Ford’s Theater. Students volunteered to perform at the school festival, but were selected to perform at Ford’s Theater where they were able to read their speeches to judges and an audience.

“One of the most important skills for the future is to be able to present information logically and publically,” McKim said.  “These speeches let the students do that.”