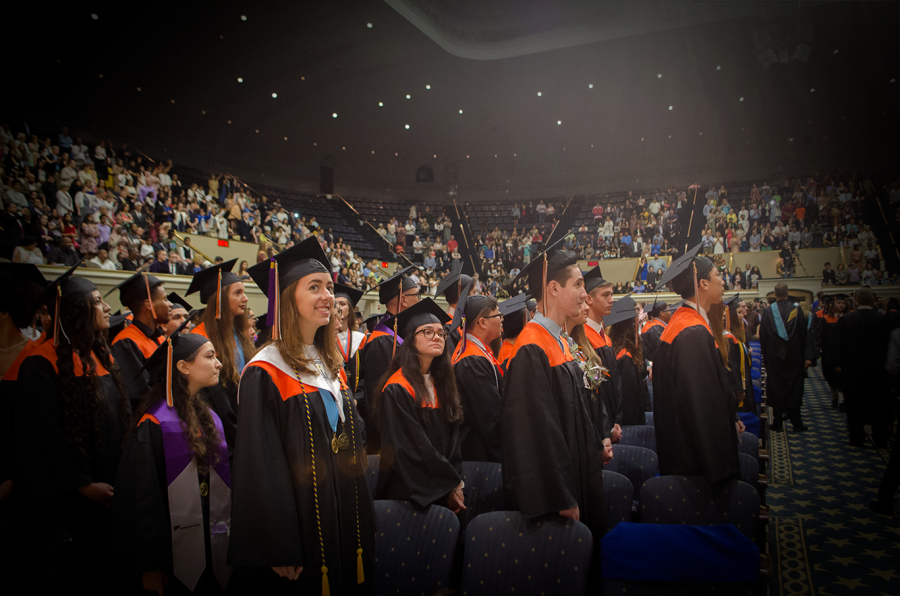 Students, families, staff and friends packed Daughters of the American Revolution (DAR) Constitution Hall in Washington D.C. May 31 to celebrate the class of 2018’s graduation on a day filled with excitement, cheers, laughs and even an on-stage flip.

Every year various staff members, students and out-of-school contacts come together to prepare the logistics of the graduation ceremony, all led by paraeducator and senior adviser Farron Riggs. This year, 334 students graduated from RHS.

Even though DAR is the graduation destination, not everyone takes the same path to get there.

“Not everybody gets to that stage in the same way and I have the opportunity to see many different stories that come across that stage and it’s great,” principal Billie-Jean Bensen said. “They’re all special and as I said in my talk, some of the students sitting in the seats, it was almost routine; of course they’re going to graduate from high school and it’s just going to happen and for some, it was very difficult.”

Often times, graduation ceremonies are slow and some people have a hard time staying awake. However, that was not the case for the class of 2018 as there was added humor to speeches including references to “how many licks it takes to get to the center of a tootsie pop” and attempted somersault flips on stage by senior Henry Pressman. The 334 graduates in the class of 2018 comprised a group with many accomplishments such as the 17 students whose GPAs ranked in the top fifth percentile in Maryland and the 78 students who completed over 260 Student Service Learning (SSL) hours.

This year’s commencement speaker was Andrew Och (‘87) also known as the First Ladies’ Man because of his expertise on first ladies of the U.S. Andrew Och has traveled the world, written two novels and is a speaker and producer.

“You have to define your own success but you also have to be ready to have that success spectrum; that level change and adapt because what I define myself as success today, is different from when I graduated,” Och said. “We all grow with life, it is a organic process, you’re a never-ending work-in-progress and you should never stop changing and adapting and progressing until you’re gone.”

RHS’ Student Government Association (SGA) President Michael Pankowski delivered a speech highlighting “memorable anecdotes from our four years together and [tying] them back to life lessons that everyone in our grade could relate to,” Pankowski said.

Graduation day is mostly about the graduates, however, all of the people behind the scenes that figure out all of the details and organize everything play a large role in this special occasion. Riggs has been in charge of organizing graduation ceremonies at RHS since 2000. He gets tremendous help from school members such as the administration, counselors, the junior class SGA and other staff members.

“[The speeches,] they were kind of like ‘be prepared, you are prepared, change will happen, change is okay, be able to adjust.’ All those pieces were involved in everyone’s speech this year,” Riggs said. “It was good and I hope that is what they [the students] take [away from the event]. I hope they sit back and think about what they did, think about what they learned, what they have seen and progress from that and just keep going forward and not looking back and making the best of everything.”

For a full photo gallery of graduation click here.