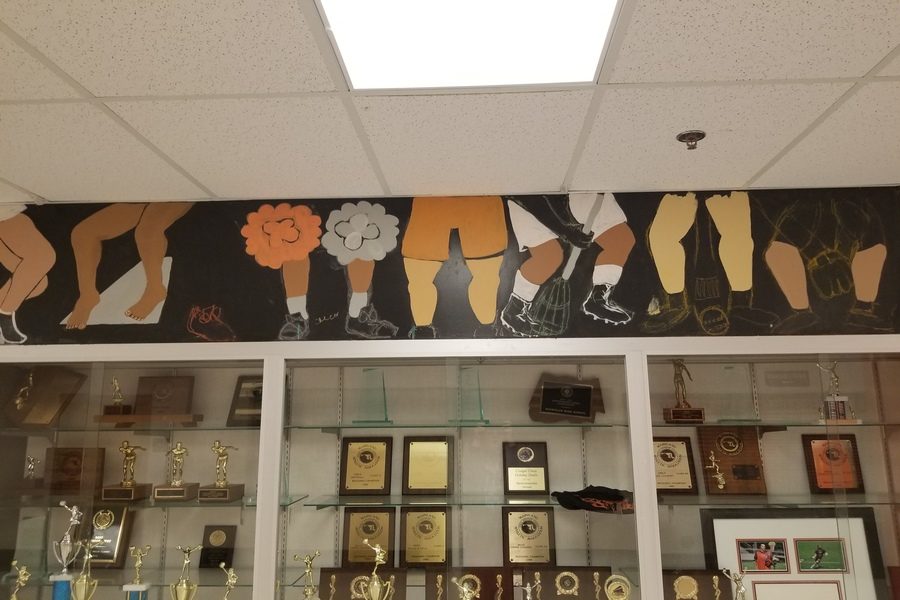 The National Art Honors Society (NAHS) began painting a mural above the gym trophy case in February, and is expected to complete it by the end of the school year. It will pay homage to RHS sports and athletes.

The mural depicts athletes’ legs dressed in their specific sports attire, and once complete, should feature all RHS sports teams. The mural was originally designed by sophomore Lisel Ament, who chose the lower body of athletes because it was simple and recognizable.

“It makes me feel proud that I have made an impact on this club, and that the things that I made are gonna be on the school for another 50 years,” Ament said.

NAHS members paint every Thursday after school, while those who cannot paint assist in other ways, such as drawing or bringing supplies. Work on the mural stopped for a week while the photo gallery was set up around it, but now that it has been taken down the NAHS has resumed painting.

NAHS sponsor Laurie Wilks has given nearly full leadership responsibilities to students, putting them in charge of organizing the painting of the mural and gathering the materials .

“My role in NAHS is, as a sponsor, to make sure that the students are there, that they support each other, and that the officers are actually performing their roles,” Wilks said. “The president is in charge of organizing the students to schedule who’s painting when, to get the materials; our treasurer helps to get that order together. It’s all student led.”

Back in 2015, IB seniors painted a mural inside the counseling office, which was the last time a mural has been painted in RHS. Due to remodeling in the building last summer, the mural was destroyed.

The idea to paint above the trophy case came from athletics director Michael Hayes, who pitched the idea to Wilks. After getting Hayes’ approval on the design, the NAHS got permission from the school to start their mural.

“I think the diversity of the players in the mural is really important, we’ve gotten a lot of complements on that whenever we’ve been painting so I think that’s the biggest impact,” NAHS president senior Claire Lyhus said.