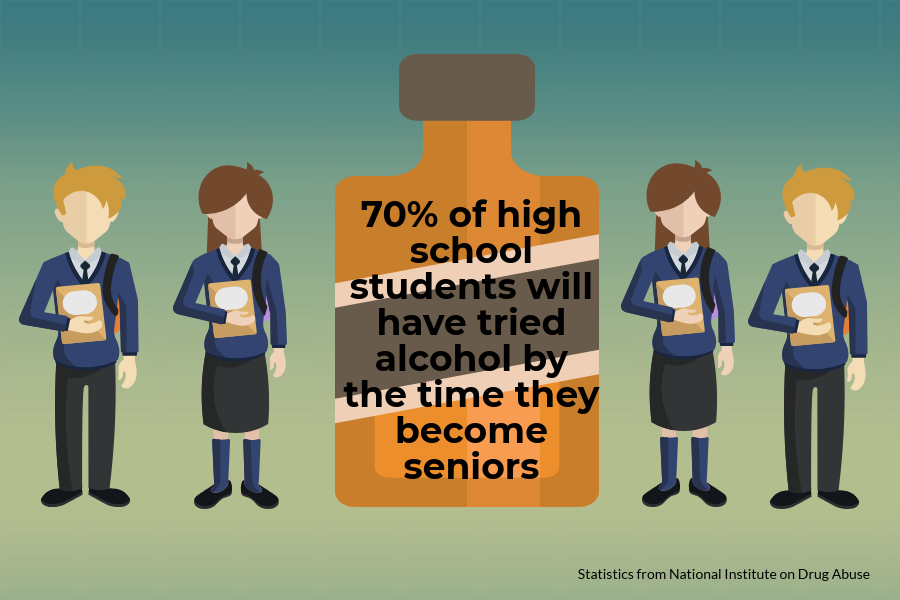 Approximately 70 percent of high school students will have tried alcohol by the time they become seniors. There is a difference between experimenting with drugs and abusing substances, but it is a line that millions of teenagers around the country have crossed, often resulting in a more serious substance use disorder.

As of a 2010 survey by the Substance Abuse and Mental Health Services Administration (SAMHSA), two million people under the age of 21 reported heavy drinking, which is defined as binge drinking on five or more days within a month. Another seven percent of high school seniors report smoking marijuana daily or almost daily, according to the National Institute on Drug Abuse (NIDA).

Adolescents have an increased the likelihood to develop addictions to drugs, as their brains are still developing, particularly in their decision-making skills, according to the NIDA website.

“The brains of teenagers are developing at a phenomenal rate. This means that teens tend to have less impulse control and have a harder time seeing the long term costs or benefits from their actions,” said Peg O’Connor, philosophy professor and author of “Life on the Rocks: Finding Meaning in Addiction and Recovery.” “Having rapidly developing brains may mean that teens develop more immediate associations between having certain feelings and using alcohol and drugs.”

Substance use disorders are defined as mental disorders within the “Diagnostic and Statistical Manual of Mental Disorders,” Fifth Edition (DSM-5), and can have varying degrees of severity. Common substances include alcohol, tobacco, cannabis, stimulants, hallucinogens and opioids. Around 8.9 million Americans are dually diagnosed with a substance use disorder and with another mental disorder, according to Drugabuse.com.

In 2012, approximately 27 percent of people suffering from a mental disorder abused illicit drugs, according to drugabuse.com. Substance use disorders can surface as a result of attempting to self-medicate or cope with another mental disorder through abusing drugs.

Substance use disorders are often treated differently than other mental disorders like depression or anxiety. There are services provided by the county that students with substance abuse problems can be referred to, guidance counselor James Rowan said.

While the treatment of substance abuse may be relatively uniform, it is often hard to determine what qualifies as substance abuse versus casual expermentation. This also varies depending on the person and the substance, as some drugs have different addictive properties than others. Additionally, some illicit drugs are viewed as less harmful than others.

“Psychedelics are almost always non harmful and are less concerned with pleasure and more knowledge,” an anonymous source said. “[My use of drugs] is far from abuse…[Abuse is] when there is a recurring urge.”

While some illicit drugs are viewed as less harmful to students than others, when consistently abused, drugs shift the structure of the brain and how it functions. Consistent drug abuse can even result in long-lasting changes that occur in the brain, which can lead to negative consequences, according to the National Institute on Drug Abuse (NIDA).

Since substance use disorders cause a shift in the way the brain works, it can be difficult for a person to quit abusing a substance. Seventy percent of adult cigarette smokers express wanting to quit smoking, while only seven percent succeed on their first try, according to statisticbrain.com.

While experimenting with a substance once might seem relatively harmless, crossing the line into a substance abuse disorder can actually change the brain and cause people to develop a dependence and even higher tolerance to the substance.