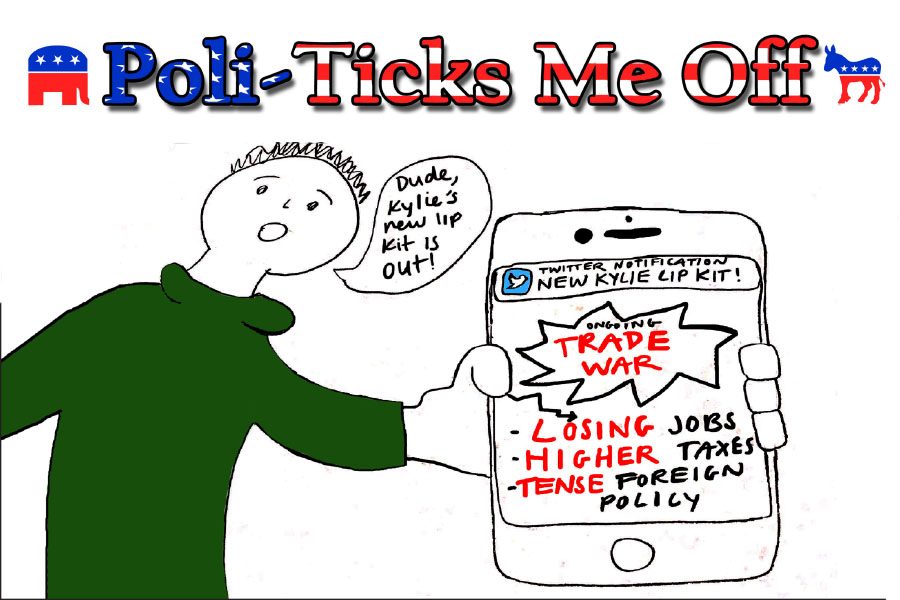 Chances are, teenagers pick up their phones in the morning to check the latest Instagram posts of their favorite celebs, or to send all of their Snapchat streaks a quick “good morning.”

Most are not instantly checking the well-being of the stock market and the current tariff stand-off between the U.S. and China. They should be though.

Not only are the effects of a trade war not well known to students, but many believe they can stay up-to-date on the latest fluctuations in the economy and taxes by checking their Twitter feed (which, while sometimes reliable, can make teenagers especially susceptible to false information).

This current trade war between America and China started in March of this year with President Trump taxing steel imports from China at 25 percent, meaning steel coming into the U.S. is more expensive. A country usually raises tariffs in order to protect domestic industries from foreign competition. Since then, China and the U.S. have evolved into slapping on higher tariffs back and forth on many different goods, the most recent ones occurring in early April with over $50 billion in taxes each.

While talk of taxes and stock markets seem far removed from the quick “good morning” of Snapchat streaks, we as teenagers and hope-to-be college students can be affected in various ways. This emerging trade war negatively affects teens’ chances of getting jobs, slowly raises the price of goods and hinders parents’ ability to easily save for teens’ college years through the Maryland 529 college savings plans.

In the past, trade wars have caused unemployment as tariffs increase the cost of goods. When things such as wine, fresh fruit and pork cost more, fewer people are willing to buy them, leading to a decrease in sales which then can lead to higher unemployment. Not only does this cause unemployment for the manufacturers of products being taxed, but also for retail workers. President Obama’s 2009 tax on imported Chinese tires had this exact effect. Though this helped save tire company employees, about 3,700 retail employees lost their jobs, according to an analysis done by Washington research group Peterson Institute for International Economics, as reported in a March 2 CNN article.

This is important for students because many seek retail jobs and this type of unemployment negatively affects their ability to get a job in an increasingly competitive market. When unemployment goes up, competition for jobs soon follows. Teenagers need to keep this in mind when applying for jobs because many jobs on the market will become harder to get, so jobs not affected by tariffs should be the ones students are going for.

As many teenagers are purchasing their first cars or enjoying shopping for the first time using money they earn from their own jobs, the trade war can increase car prices and cause various goods to skyrocket. Students are already juggling extracurricular activities, schoolwork and in some cases, a job. The potential increase in prices can put a strain on student and family spending and can make students more stressed and desperate for money while they also juggle their extracurriculars and schoolwork.

Additionally, due to the instability of the stock market, Maryland 529 college savings accounts may also be affected by the trade war. The Maryland 529 is an investment plan that helps families save money for higher education, such as college. This investment can be in stocks or bonds and if stocks begin to do well, college saving plans can earn a lot more money than previously invested due to interest. On the flip side, if stocks are unstable and going down (such as right now), the Maryland 529 plan declines in value and families lose college savings that is not easily replaced–an even greater concern for teens about to attend college.

While the opposing argument was aptly put by President Trump in a March 2 tweet that said, “When a country (USA) is losing many billions of dollars on trade with virtually every country it does business with, trade wars are good, and easy to win,” he is missing a vital American point of view: the youth. Yes, trade wars can be beneficial to companies and the government when taxes are slapped on export tariffs and they make more money. But this equation is missing teenagers who are going to college and entering the workforce with increased strains placed on them because of a supposedly “good” trade war. Teens do not think they are so easy to win when they are losing so much.

More often than not, teenagers are unaware of their country’s ever-changing economic status. While simply skimming articles in the newspaper or glancing at stocks may be a step in the right direction, there is still more, as a student, that can be done in school and in the community. One way students can make a difference locally is to start a business or economics club at RHS in order to educate others on how the economy works and how current events like the trade war and the shaky stock market affect students.

Students deserve to join the workforce with a decent paying, fulfilling job and be able to attend college with the savings from their parent’s 529 plan without having to worry about the president’s impulsive decisions. After all, it’s hard to understand how holding students back is such an easy win.