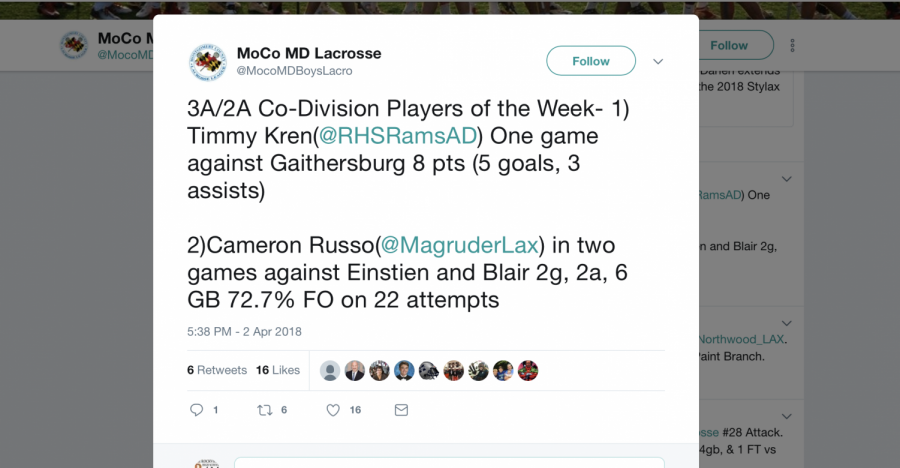 Tweet from @MocoMDBoysLacro awarding Kren player of the week

While Timmy Kren is only a freshman at RHS, he is becoming one of the strongest players on the varsity boys lacrosse teams, evident in the recent announcement as player of the week in the 3A/2A division April 2.

Playing since the second grade and for four different club lacrosse teams has helped Kren expand his skills by developing his talents on the field against a range of competition. His experience comes from playing for the Bethesda, DC Express, Bethesda House and the MDX club teams. In a game against Gaithersburg, Kren displayed his talent by scoring five goals and getting three assists in his position as an attackman.

“[I] help set up other people on the team to score,” Kren said. “I’m not trying to go to goal every single time, I’m trying to look for the open man so that they can score.”

One athlete from each division in Montgomery County is awarded player of the week via the Moco Md Lacrosse twitter page based on their contributions in the games played that week. Kren continues to build his skills by playing wall ball for 30 minutes every day to help prepare him for more games this season.

Kren will be playing on the varsity boys lacrosse team when they take on the Watkins Mill Wolverines away Wednesday, April 4.