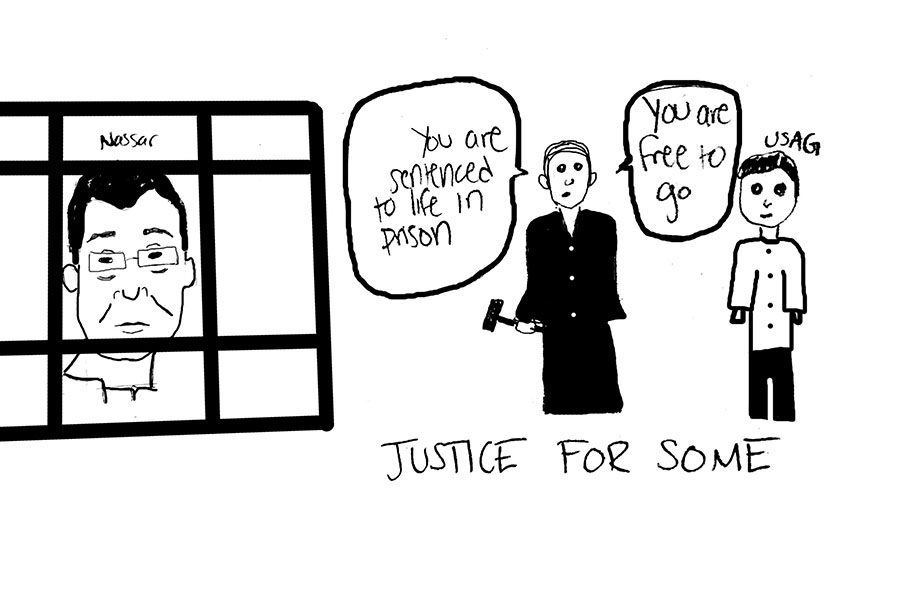 Professional and collegiate athletes have their physical strength constantly tested throughout their careers, but after over 150 gymnasts confronted their longtime abuser in a week long court case that took place in January, their mental and emotional strength was also tested in unimaginable ways.

Larry Nassar, a once world renowned Olympic and collegiate doctor, now serves the rest of his life behind bars after being convicted of multiple sex crimes. One hundred fifty six women made impact statements in court recalling the past two decades of Nassar’s abuse.

Nassar manipulated young girls who were naive to the detrimental “exams” he was giving them. In some cases, Nassar had the audacity to abuse these girls with their parents in the room. He reassured the girls time and time again that what he was doing was routine and not only did the girls trust that, but they continued to idolize Nassar as the perfect doctor he led them to believe he was.

Nassar manipulated all the survivors, as well as the doctors surrounding him to protect his sick ways. Nassar convinced other professionals he wasn’t doing anything wrong so many of them defended him for years.

Michigan State University (MSU) and United States of America Gymnastics (USAG) had people within their communities blindly supporting Nassar because he was an A?expert.” USAG board members were forced to step down after Nassar’s sentencing which is certainly a step in the right direction but more needs to be done.

Any person who knew what Nassar was doing and let him continue hurting these innocent athletes needs to immediately resign from their current position and offer a formal written apology to the families, which can serve as a reminder to future athletes and coaches to never let these horrific acts happen.

Eventually, after being ignored for so long, these women were given a voice. After hearing the 156 statements, Nassar was convicted of his repulsive crimes and there was a sense of accomplishment in the courtroom, of justice, because each and every survivor knew Nassar could not hurt anyone else, ever again.

It is easy to judge, blame and even hate Nassar. He deserves no sympathy and should spend the rest of his days thinking about all the innocence and happiness he so effortlessly stole from so many. But, it is hard to understand how Nassar was able to continue abusing for over two decades.

Despite Nassar’s extensive resume and all his medical accomplishments, he was never a doctor. Nassar was always an abuser. Girls now know that they have a voice that must be used when experiencing any type of abuse.