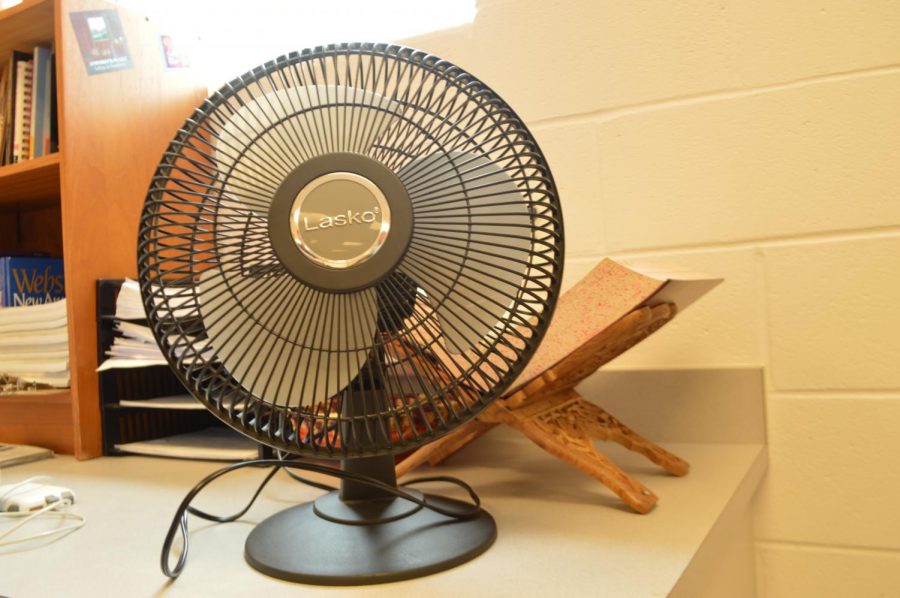 Portable fans become a necessity for classrooms that suffer the most from the broken heat system.

Recently students at RHS may have noticed that some of their classrooms feel more like a sauna than a school building.

The cause of this unexpected heatwave is the breakdown of the school’s heating system March 3. The system failure was the result of the violent nora��easter wind storm to hit the east coast the preceding weekend, which had winds topping 60 mph. Subsequently, the power outage from the storm blew some of the fuses which power the HVAC system.

Initially the damage was perceived as minimal as only 2-3 classrooms reported problems, so school technicians bought new fuses to replace the broken ones. However after the newly installed fuses blew again, it became clear the problem was much bigger than originally anticipated.

“At the same time, classroom temperatures indicated that the problem impacted more of the building than originally thought,” school business administrator David Stough said. “MCPS maintenance quickly sent more technicians to evaluate all of our HVAC equipment and discover the causea��the drives that run the supply and relief fans were bad.”

Currently school technicians are manually operating the functional parts of the system as outsourced contractors attempt to fix the problem. Meanwhile teachers, who spend the entire day in these classrooms, are struggling to guide students through lessons comfortably.

“I’ve been opening the windows and keeping the door propped open. Whenever possible I try to give my classes a brake and take them to the library,” English teacher Sharon Lee said.

Students who have classes in the affected rooms have been equally bothered as they struggle to focus on their teachers’ lessons, while sweating in the overheated rooms. Many of them are forced to take off layers of clothes in an attempt to be more comfortable.

“The first time I noticed the intense heat was in Mr.Ripley’s cooking class. Even with the windows open the heat is really overbearing. I’ve noticed myself sweating a lot, even when I take my hoodie off,” senior Naomi Goldstein said.

Although teachers and students are beginning to become impatient with the repair process, admin remains optimistic that the system will be repaired soon and they are satisfied with how the process has gone thus far.

“They’re [contractors] projecting being finished by the end of the week,” Stough said. “Ultimately, the process is going as quickly as it can, and the collaboration and communication between all involved has been terrific.”